Bird in the bathroom 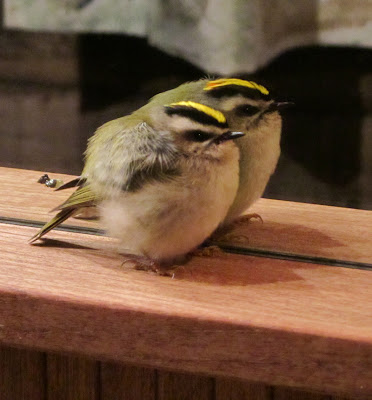 Yesterday a bird hit my window in the late afternoon which always makes me sad.

I went out to move her and of course she wasn't dead, which about broke me. She was so twisted around and breathing so hard I didn't want to watch her suffer.

I picked her up, put her in a box and put the box in the bathroom (my only room with a closing door), and put a space heater in there to keep her warm just in case. For at least the 100th time wished I was qualified to euthanize injured wildlife.

Around 10pm I got home and went into the bathroom - assuming I was disposing of a body. First I noticed the bird poop on the floor and finally I found her - all puffed up and sound asleep next to my mirror.

I decided to let her sleep in the bathroom and in the morning if she was still kicking around I would take her up to the wildlife rescue so they could check her over for breaks, etc.

By morning I had a situation. :) She was singing away in the bathroom and the cats were having an absolute meltdown. This will be the third bird I have put in the bathroom and it just devastates them. It would have been nice if she put a little silencer on her tweeting.

So I went in with her, realized she was flying, singing and pooping and all her friends were up for the morning and she probably didn't need to go to wildlife rehab - not to mention I have a lot to learn should I ever get educated in euthanizing. I was going to catch her but knew it would just been traumatic for both of us so while she hopped around and tweeted, I struggled with a window that never opens.

Finally she was able to hop by me and fly out to the nearest tree.

(After some looking around I believe she is a golden-crowned sparrow - the problem being that she was puffed up until morning and I didn't get a photo of her with her feathers all in order which actually looked fairly different).
Posted by thequiltingdoberman at 9:12 AM 3 comments: