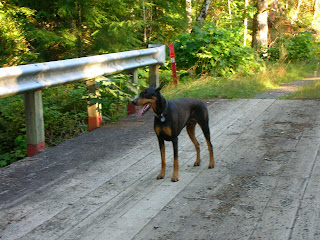 Yesterday the quilting doberman and I decided to investigate a new area of the North Fork. It was supposed to be a primarily road walk with maybe an abandoned trail if I got lucky. 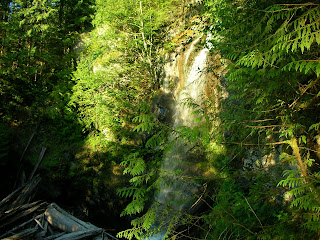 Then I saw what I thought was a great waterfall. So up the hillside we started. The waterfall was actually very nice although very unstable around it making it difficult to get a photo. The hillside coming up to the waterfall had been thick with lots of fall and difficult and I thought I saw the road on my map above the waterfall so I figured it would be easier to keep going up rather than coming back down.

I was definitely wrong on two things: 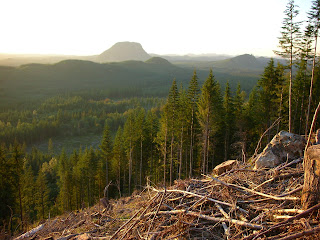 One, where I thought the road was actually wasn't where it was. Instead, that clearing I saw was a very steep, slash field from logging. The road was much further above that.

Two, at the point of the waterfall it would have been much easier to have gone back down. Once I got to the slash field though, I was past a point of no return. Resulting in well over an hour of some of the worst hiking I have ever had to do. The quilting doberman was very cross with me and reminding me that for all the time I tell him he is not a kid anymore that I was really putting his body through a lot of work.

Once we did finally hit the road I was aiming for there was of course another beautiful waterfall that the quilting doberman could enjoy from the safety of the road. And he did. 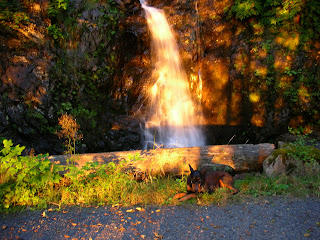 Posted by thequiltingdoberman at 12:22 PM 2 comments: 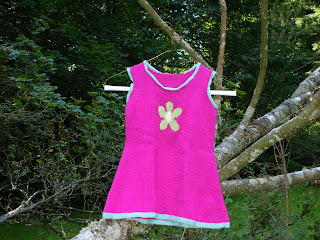 The beautiful thing about knitting baby gifts is that it really doesn't matter what size they turn out as long as it is not too small because the kids just keep growing. Fortunately; I rarely knit too small.

Baby gift knitting is also an unfortunate way to build up my back log of projects. In knitting; my least favorite part is putting the pieces together/finishing. The intended baby for this one wasy born probably in April? I have 2 other gifts in progress for babies also already born.

These twin dresses I believe made it close to on time: 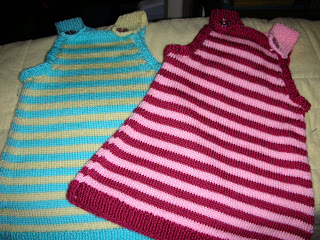 These two dresses didn't turn out as crazy large as some of my other baby gifts. Both the sun dress and the twin dresses came from the book "Adorable Knits for tots" by Zoe Mellor. I have made a lot from the book and they have been responsive when I have had pattern problems.

One of my projects I wish hadn't been late was a quilt for my Great Aunt's 90th birthday which was February 2006. I would say I finished it around her 91st birthday which really isn't all that bad and she keeps it in her room with her and on her bed (according to my Grammy). 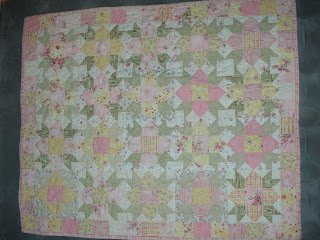 Bought too many fat quarters 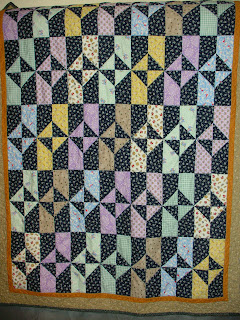 It took me a bit when I first started quilting to realize that a lot of quilt patterns actually require fabric much larger than fat quarters. Fortunately I was given the book "Phenomenal fat quarter quilts" and this is one of the quilts I made from it. It is perfect for a newer quilter like me that needs some general guidelines (like amount of fat quarters needed) but still wants the chance to be as creative as possible.

Since I have began quilting a couple of years ago I was adament that I wasn't going to applique. In my opinion, my knitting was for my handwork...quilting was for the machine. But occasionally a pattern would really call to me so I broke down and attended a beginning applique class at Quiltworks Northwest. The class was Nancy Lee Chong: Needleturn Applique and it was pretty much opinion altering for me. I plan on starting an applique pattern very soon. Sadly she is leaving the area and heading for Oregon because it was a great class.
Posted by thequiltingdoberman at 4:07 PM 1 comment:

Sorry, no quilting and no doberman 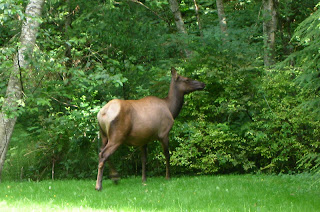 For my first post I don't have a photo of a doberman or quilting - or a doberman quilting; but I am sure I will soon change that. Instead, I have a photo of an elk that likes to come up to my window and eat the tree right in front of my house. Had my cats not been staring at her; I am not sure I would have seen her (because it was about 5am and I was sleepy - normally I would notice something this large). My brave doberman was sleeping under his quilt and never told me she was there.

I recently saw a friend from junior high who has encouraged me to start a blog so I can also share my knitting and quilting...but you can plan on several animals to show up as well and whatever else I feel like talking about.
Posted by thequiltingdoberman at 3:54 PM 1 comment: