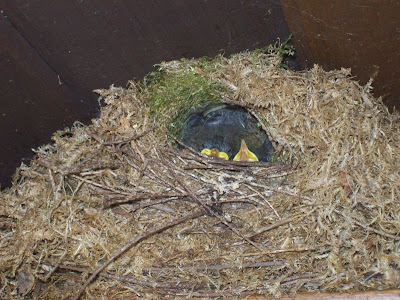 This morning I was going in the front door and thought I heard a very familiar low level peeping. And looked up to see two baby bird sticking their heads out my wren nest.

Since I hadn't seen the adult wren with a mate; this caught me off guard. All my other wren families have been a 2 parent system. Makes me think that maybe he got killed at some point which is too bad.

By the afternoon there were 4 heads. Doing some online photo comparison, they might be a few days old? 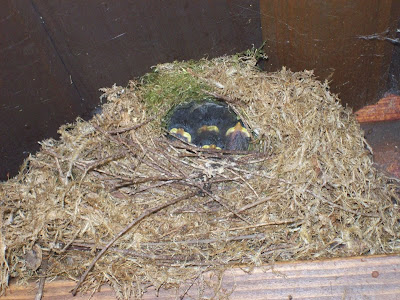 When I first got Rusty and would try and lay next to him he would look at me confused and get up and walk away. He has come a long way (those are my legs he is laying against). 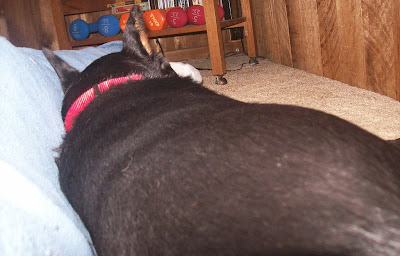 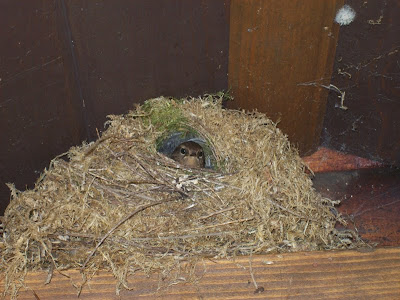 During the winter, the wrens practically predict the weather for me. I know if they start cramming into the nest (above my only door in and out of the house) that a really cold freeze is coming; and usually within 12 hours of them showing up. A couple of weeks ago however a new resident showed up. I think this one might be a Winter Wren but I am not a birder at all.

Anyway, she lives above my door. And she added some new moss (can you see the flashy addition of green above her head?) so she appears to be staying. I believe wrens are good meat eaters (bugs and spiders) so I am always extra happy to have them around. 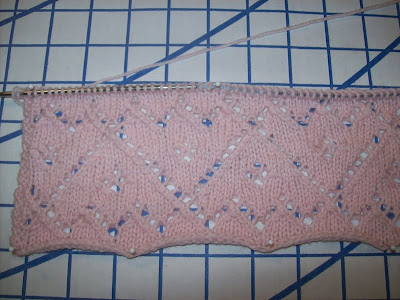 I have so much work and stuff going on that I am really not getting much knitting or sewing done, but this current project is a good challenge. It is a Rowan lace scarf pattern. I am actually enjoy the pink of it, even if that isn't much of my favorite color. 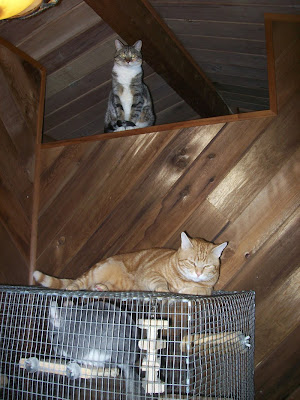 This sums up the cats relationship with Pascal (the chinchilla). Pascal and Emile (orange tabby) can hang together like this all day. When Leela (gray tabby) gets on the cage, she has to get off as quickly as possible because Pascal starts trying to get her feet. 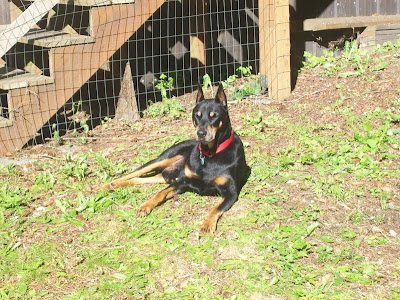 Once Rusty is done trying to take my tools and marking the brush piles he usually settles for while I do yard work. I am making the fenced yard more Rusty friendly since it is really his only off-leash opportunity.
Posted by thequiltingdoberman at 12:44 PM 3 comments: 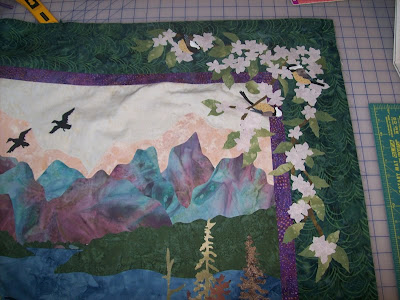 Finally I took an afternoon to complete the last block of the At Home in the Woods project. It had a ton of little leaves and flowers involved. I do love the elements that drop into the other blocks or into the border.

Then I got to prepare for quilting. Some of the areas were impossible to get safety pins through - they were too thick. 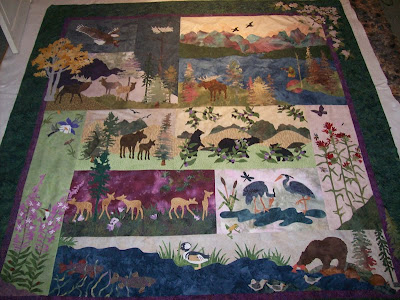 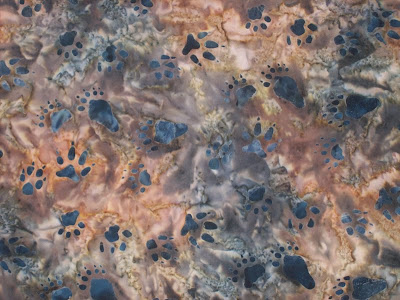 And finally, the beginning of some quilting. Which was surprisingly more difficult than I thought. Some of it is just the frustration of not getting the perfect stitching I want.

Yesterday I decided to start another quilt so I would have some piecing to go to when I needed a break from the quilting on this one. It will keep me from rushing it. 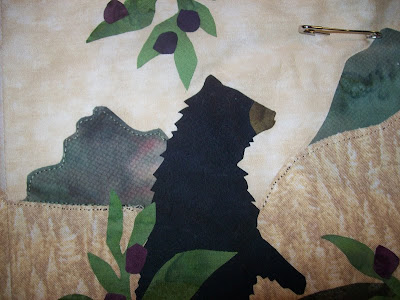 I realized quickly that rather than start with the fine tracing on things like animals I should work more on the bigger, background elements. I have had some small pieces (like a ladybug and berry) fall off altogether as the quilt is being folded and manipulated. It is hard to not want to randomly move around and tack down all the pieces that are starting to release first. But I would rather just collect them and be a little more methodical in my quilting. Not to mention it is a pain to be switching all the colors. 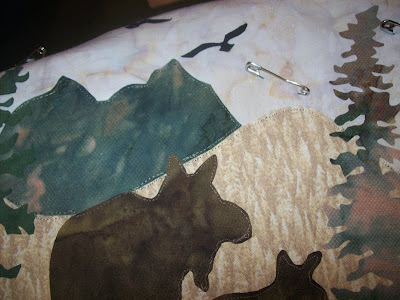 Rusty is working really hard at his training, and it is coming along. He actually doesn't have a choice which is totally evident in this photo which shows how he feels about sit-stays: 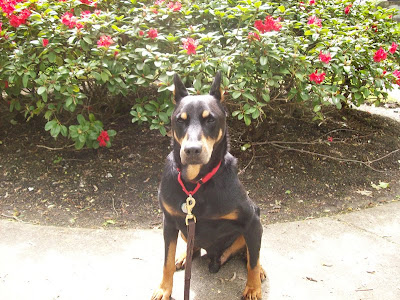 A huge amount of work is going into his public manners right now. I think actually that might be the face I make when I have reached my saturation during training (the handler really is always the dumb one).

Check out Mr. "Of course I know how to settle in the house": 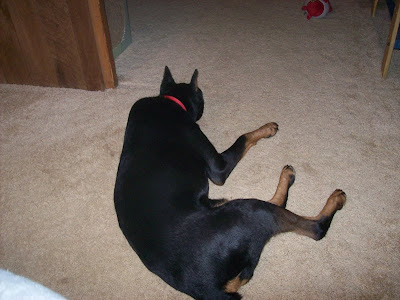 This is brand new behavior. Three nights in a row now so I am ecstatic. He still tries to get into trouble first but at least now he finally settles. No sleeping yet; but I bet he is close. 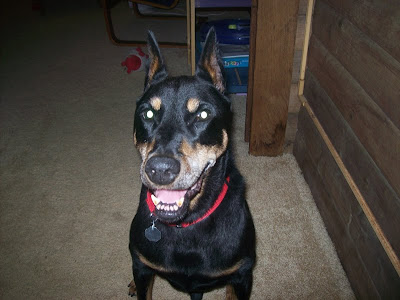 Posted by thequiltingdoberman at 5:22 PM 4 comments: