The Leela Is Out There (X-Files are back!)

What a great Monday. I knew once I got my work done I could watch the X-Files season premier. I don't even understand how people could bash it...it was so enjoyable. :) 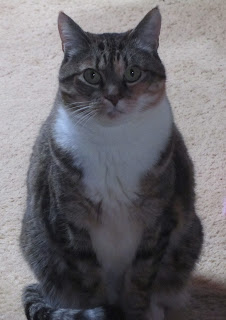 Leela is watching you

I had a great time watching the premier and can hardly wait for the next episode. I laughed, I groaned, I enjoyed...

Nim basically stared at me the entire time so that I would walk him afterwards. 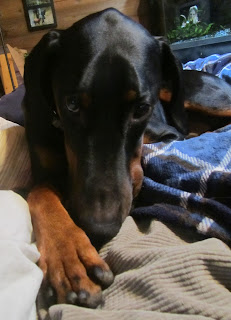 He isn't 100%, but getting better. Despite being cold out, it was a pretty day for an easy walk. 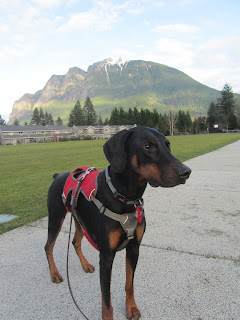 Posted by thequiltingdoberman at 5:43 PM 5 comments:

We are finally home! As I type this Nim is on his second Imodium and Leela is pacing around him on the electric blanket...talking about her feelings. 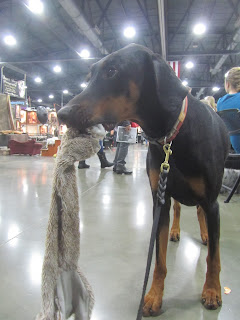 Friday was probably my favorite day of the 3 days we competed. Our biggest accomplishment was actually our CGC (Canine Good Citizen). I wasn't a good enough handler to get Odin through it and so to finally have accomplished this meant a lot to me. It was probably the most fun CGC I have ever done too (I had tried twice on Odin, and once previously on Nim). They basically used the show floor so it was a lot of real life interactions...as much real life as a show can be. Nim got to be used as the test dog for a couple of other dogs that needed to do their test as well, so a great experience all around. I was so proud of him.

We also finished our Rally Advanced title. What was extra meaningful to me is that we actually finished strong. I swear my title legs are often my weakest legs and I hate it. What I loved about this show is progressively he was more at ease and more happy for the rally trials. That made me very happy. What plagued us pretty much the entire 3 days, and Friday was no exception, was the sits. Clearly sitting under public pressure is not easy for these dogs. Lack of automatic sits or having to re-cue sits cost us all three days. There was a key sign in our final rally run in which he had to sit in front of me...he got in front of me and then just stood there frozen, looking around me at all the people and commotion. I could hardly blame him.

Friday was packed with the public, school groups, special populations groups and lots more competing dogs. It was amazing and very loud. At this point the agility rings were really going strong. Nim and I were approached a lot by people wanting to talk to him and pet him.

The worst part of the day ended up being the drive home. I left at noon and I should have been home by 4. I was home by 7. There was a terrible accident and I ended up leaving the freeway and just walking around Lacey, WA for about an hour before trying again.

Now we are just trying to decompress and get ready for work (tax season is officially upon me). Nim has ended up being a little off with a lot of gastronomic issues. I am grateful this didn't happen while we were on the 3rd floor of the hotel. This is an extra reminder to me just how big of a deal these last three days were on Nim. What a trooper. Not easy being my dog. :)


Posted by thequiltingdoberman at 11:21 AM 4 comments:

We were up early again this morning, but once Nim ate, he was back to sleep. I think yesterday was a big day for him.

Today was much shorter for us, and all the photos I took of the event were kind of lame. 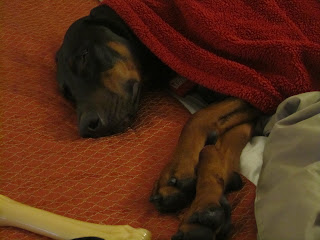 So. You just get photos of Nim.

We had one run today: Pre-Novice. Nim is killing me. Somehow we need to work out these ring heeling issues. We are just all over the place. It will be fine, it is just hard when you train something so hard and it doesn't quite come together the way you want for performance. It wasn't pretty but we qualified. 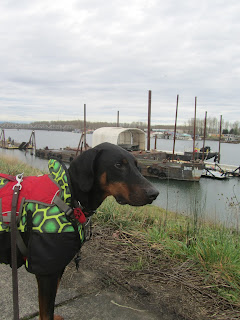 Today we had a lot more down time. We watched other dogs at the show and I walked through all the vendor booths.

The weather has been cold but not raining for the most part so we have done a lot of really long walks which have been lovely.

I went to a place called Proper Eats in North Portland and picked up a great sandwich. It is a neat little grocery and deli.

Tomorrow is our last day here. The show is so big and chaotic on the weekend that I was advised to not register Saturday/Sunday. :)
Posted by thequiltingdoberman at 5:08 PM 4 comments:

Today was our longest day at the Rose City Classic and it did not disappoint. Nim was a champ. I was pretty overwhelmed at times, but he did amazing.

Let's get some complaining out of the way. If you are new to the venue be prepared for there to be clear signs telling you everywhere you are NOT allowed to be without a clear sign telling you how to actually get in. Being a new exhibitor to an unfriendly venue was further complicated by my choice to take a shuttle and not drive myself.

After getting dropped off in the dark I proceeded to wander aimlessly around the building lugging a heavy crate, a chair, a pack, and a very hyper dog. It was awful. By the time I found a propped door to actually get in I was greeted with rows and rows of rings, but still no clear signs of where to go. 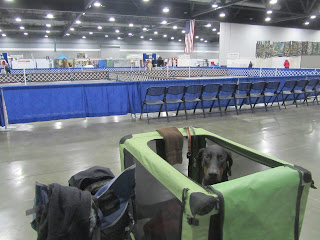 I finally found our ring, set up, and took an emotional break. Keep in mind, I also didn't get any paperwork for this show that I normally would have and I am new enough that I didn't even know how to look up run times online until the night before. I was frazzled. 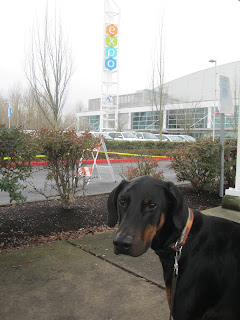 Now the fun stuff. We were surrounded by Dobermans all day long. Most of the exhibitors were kind and supportive. The dogs were fun and Nim had a lot of social time.

We did 4 runs for the day, all against Dobermans only. The sponsoring Doberman Club (Mt. Hood) did a great job and I got to be around a lot of really nice people.

1 - Novice Obedience - Not pretty, but qualifying. This should be our AKC title (CD) run. I wish it had been better, but for an AM run given my stress level it was just great to be there with Nim.

2 - Rally Advanced - first leg. I was a little caught off guard what went wrong on this run, but we still had fun and I gave some thought on what we needed to try for the next run.

3 - Rally Advanced - second leg. Best run of the day for us. I caused us points. I made a call that was the wrong one. But he was happy and we worked well together.

4 - Novice Obedience - NQ. In many regards this was actually a better run than the first run of the day, but when he blew the heeling section he went big. Hahahaha. 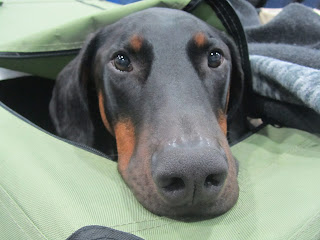 After the final run he immediately got his frog which he held in his mouth for the rest of day. We went down to check out he confirmation Dobermans so he could pace in slow circles and show everyone his frog. 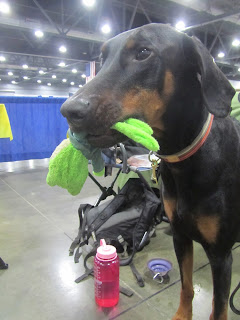 This was the lowest crowd day from the sounds of it, and still such a show jump for me. Tomorrow opens "All-Breed" so the hotel is already way more packed with dogs. Once I calmed down and got the lay of the land I really had a good time walking the circuit with Nim and checking out all the vendors. 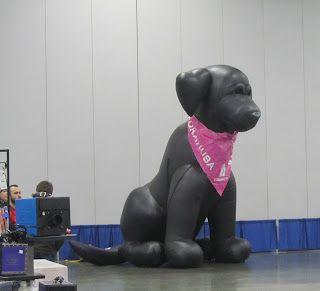 It was incredibly hard for me to get photos of other confirmations rings. The Newfie ring on the other hand was huge. Majestic. The Akita ring was also beautiful to watch. The Dobermans, Akitas, and Newfies were all next to each other so that was a lot of gorgeous large dogs to watch. For Nim it is all about the toys. We are both unbelievably tired, but what an experience. Great things learned and experienced today! 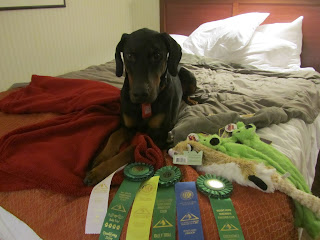 Posted by thequiltingdoberman at 11:10 PM 4 comments:

This was the snuggle pile yesterday morning. Emile never snuggles Nim like that (Leela on the head is nothing new - for any of us). Nim looks moderately confused. 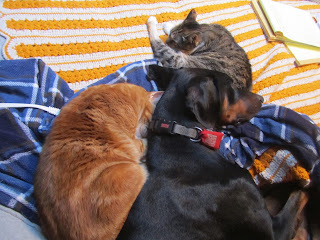 Today we are in Portland, Oregon. As you can tell from Nim's bloodshot eyes it has been a long day. If you watch my Instagram you got to see a couple of rainy but happy walk photos after we got to the hotel.

We are down here for the Rose City Classic Dog Show. Tomorrow will be the Doberman specialty and we are entered in both obedience and rally obedience. We have to get there early so hopefully people get settled into their rooms soon and then Mr. Busy Body can go to bed. 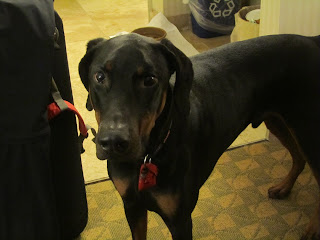 Nim has a lot of opinions about people checking in.

We are having fun. We are basically in the "dog wing" of the hotel. This is a big show and a lot of people stay in this hotel. It has been fun to see all the different dogs throughout the day. 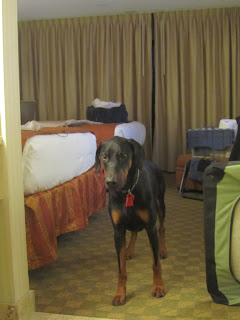 I am hoping to get some photos at the specialty tomorrow. It will be our longest day day.
Posted by thequiltingdoberman at 8:43 PM 3 comments:

It snowed most of the night and continues snowing this morning. I know how much my Florida reader cherishes the chilly, snowy details. :) 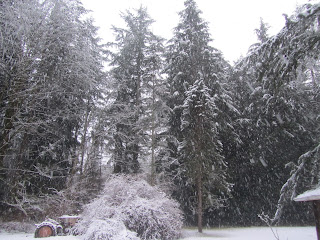 Nim has the snow sillies. He strongly prefers the snow to the rain. 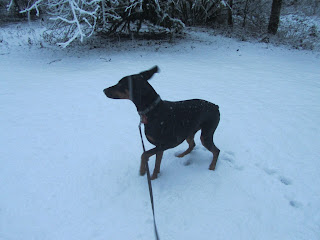 In other January news I can hardly wait for the X-Files season premier. I already watched "X-Files: Reopened" which was kind of a teaser, behind-the-scenes release. 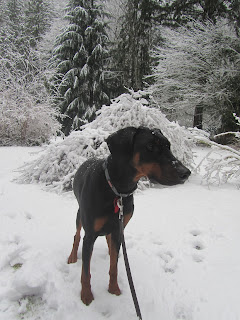 Posted by thequiltingdoberman at 9:30 AM 4 comments:

For the first time in several years I am not participating in the New Year's Day Mystery Quilt. I am a bit sad about it, but it is the way it goes. I have a scrappy quilt on the machine and that will be enough for now. 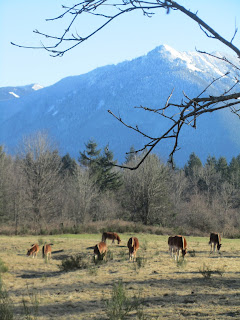 This morning I took Nim for a walk with the main purpose of trying to photograph what I think are burros (if they are not burros, tell me - right now they are fulfilling my childhood "Brighty of the Grand Canyon" dreams). They were not where I hoped they would be, so I had to take photos later from the road. 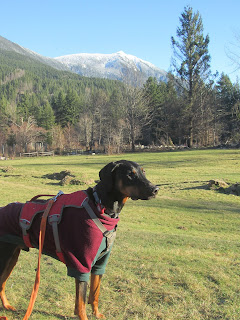 Nim and I still had a good walk in search of them. The weather is beautiful but cold, and today there was a lot of wind. 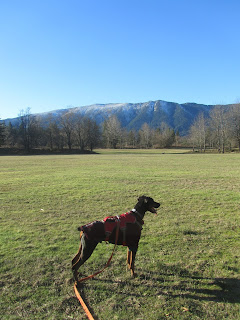 For the New Year I don't have really any resolutions, but I will say these are some items on my radar for the year: 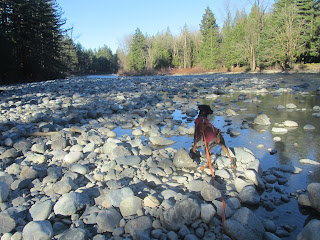 After my failed attempt to capture the burros on my walk (none of them would come close to the railroad grade side of the pasture). I drove to the place along the road I know I can find them. 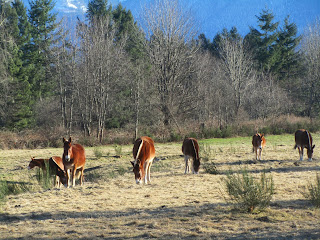 This field used to home cattle. I am not sure if it is rental pasture land or what. I love these guys so much though. 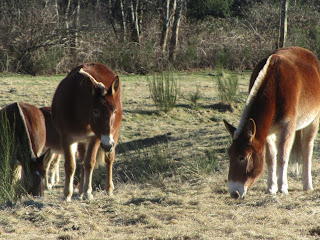 Look at that one...looking at me like Nim does when he is about to be bad. :| 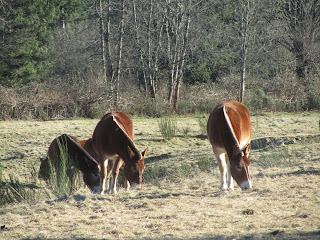 I think if I had pasture land I wouldn't mind a small herd of burros.