Today was my 3rd official workshare day at Jubilee Farm. I find the work hard and yet every week I wake up looking forward to it. The work uses your body in such odd ways and often moving through the plants and soil is almost meditative. My back is always tired, and surprisingly often my hands are too.

Week 1 and week 2 I did a lot of roasting, some soup making, and stir frying. I try and do all the prep on Tuesday when I get home from the farm to cut down on waste. 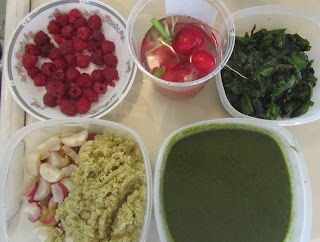 This week I have shifted to chopping and freezing. I have burned out on roasted turnips. :) I am excited about the zucchini. I will be shredding that later to see if I have enough for bread. I can't wait for the squash to really take off. 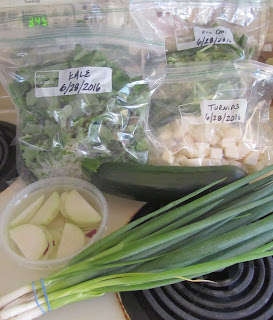 The irony off all this is that part of the reason I signed up for workshare was that I was going into the summer basically unemployed after tax season. Then wouldn't you know? I got a part-time job at the end of May. Regardless this has been a great experience and I am buying very little in the way of groceries right now. All my Mint "overspending" alerts are always on the pets. :) As it should be. 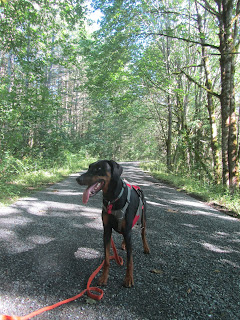 Summer is upon us, and after a week of rain, we are currently in a week of sun. It is a good thing the days are long right now because I feel like everyday has too much to get done. 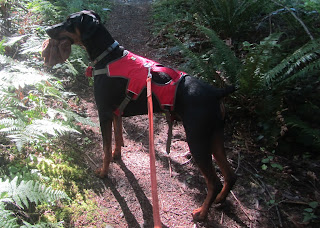 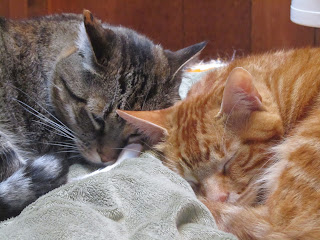 Posted by thequiltingdoberman at 4:29 PM 4 comments:

Its A Friday. White Rabbits and Dog Shows.

Happy Friday folks. I believe thanks to the holiday week last week, this week felt extra long. I don't know. All I know is that it has been exhausting.

I woke this morning to Nim losing his mind. Turns out, I have a rabbit infestation. I had been trying to figure out who took out one particular plant, I have a strong suspect now: 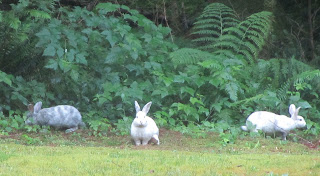 A couple of weeks ago I had seen a single large white rabbit. I contacted the family on one side of me (not the elk killing neighbor) because it is a family with kids and a pet pig. It was not their bunny.

Fast forward to this morning. When I went outside to chase them off because they were digging holes there were actually 4 of them this time. The photo doesn't give you much, but these are over 2x the size of the wild brown bunnies we already have out here. I have a bad feeling about this.

On to dog show happiness...

Last Friday Nim and I head out to Seqium for the Hurricane Ridge Kennel Club trials. We only did one day, but it is a three day event. This really is a beautiful location. 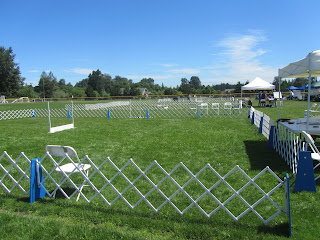 This is Nim's kennel with two Leonbergers he knows. You will notice their crates are even larger. I believe next year if I do this I will need to bring an actual tent shelter. 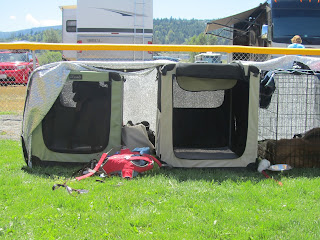 The single downside was really the constant sun. It honestly wasn't even terribly hot, but the beating sun made it far worse. We had some great areas to walk in between trials and it was a nice day to have a little road trip. 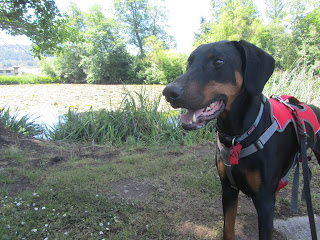 I wanted to walk more of this path between runs, but we needed to go in the ring again. 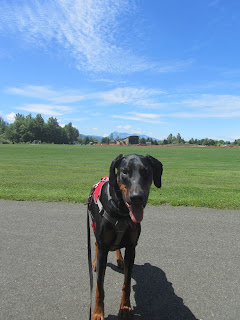 We didn't qualify in either run, but there were some really good things in the second run that I am happy about. For Nim this was a perfect day of laying around, people watching, and my undivided attention. 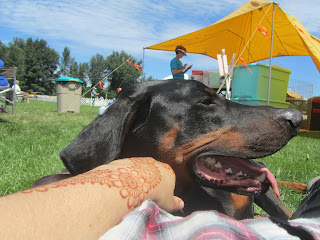 Have a great weekend!
Posted by thequiltingdoberman at 7:43 AM 1 comment: 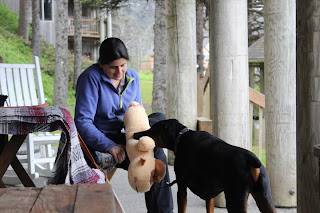 If you follow my Instagram, you probably saw Nim sleeping on his monkey later as we started our trip home.

It was very hard to pack up and be adult about going home. We both had full weeks ahead of us and needed not to be late.

We checked out at the Sandpiper and headed to one more location on the beach. We actually even drove on the beach a bit. 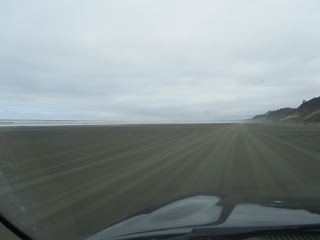 I have mixed feelings about this. I guess as someone walking on the beach I find the cars kind of annoying. However, I also see the relaxation of it, and moreover, if you have a limited mobility dog or human, what a way to let them get up close! 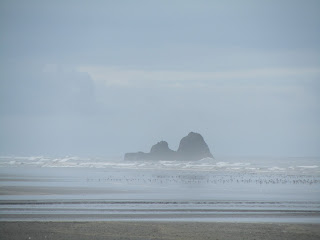 In our case it got us closer to some rock formations I had been interested in, and helped with lack of time and improper footwear. 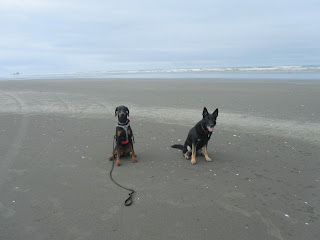 This was definitely not a long enough vacation for me, but it was a great chance to slow down for a few days and I am grateful we went. 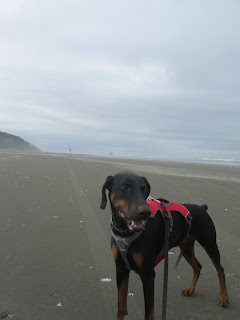 Posted by thequiltingdoberman at 4:14 PM 2 comments:

Wow! I didn't mean not to finish journaling the beach getaway! Life just went nuts these past few weeks. I had a couple of dog events and started a new job. I pretty much look at the photos from this trip daily. I can't wait to go again. 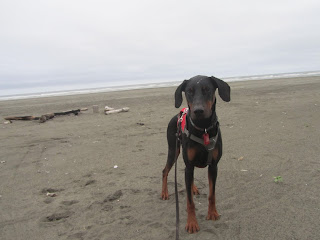 Day 2 had more wind, some rain, and generally cloudy conditions. I spent the day alternating between quiet reading (always with all the doors and windows open) and walking the beach. Notice that the path to the beach is right outside the door. 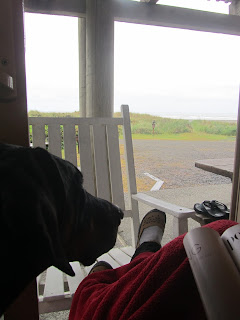 On day 2 I realized 3 things I should have packed: 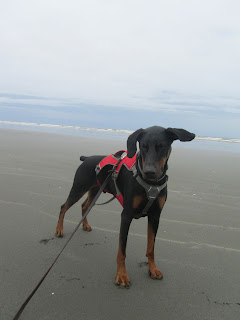 On day 2 Nim decided he would pee in the ocean. I don't know what to make of that, but he was generally pleased with himself. We did have to always go to the dunes for any pooping. And yes, we picked it up. 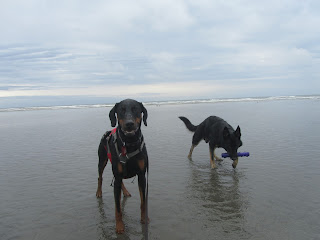 I love this photo of Jack and Nim because basically they are both smiling and laughing. Such happy dogs. 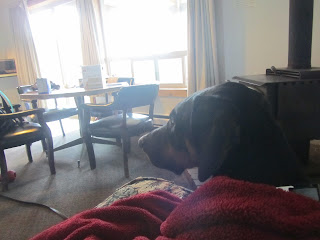 Sometimes Nim would sit on my lap while I sat around and read. The windows were always open so we could hear the ocean. 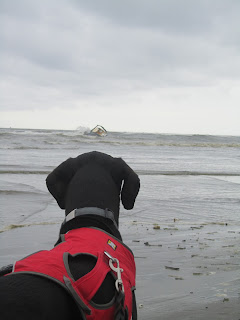 On day 2 we did a quick drive south to Ocean Shores and went to the jetty. We were a bit nervous at first when we saw the backhoe, thinking there was going to be some giant dead whale, but it turned out the backhoe was trying to pull out a truck that was part of a shrimp boat salvage. 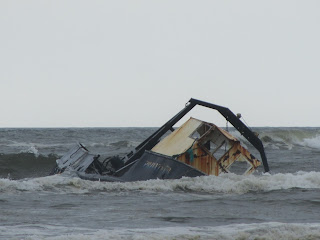 The shrimping boat had actually sunk in early April. It was tethered to the shore and there was an ongoing salvage attempt. I love looking at stuff like this. I think the plan is eventually to fully recover the boat. I am not sure if that ever happened. 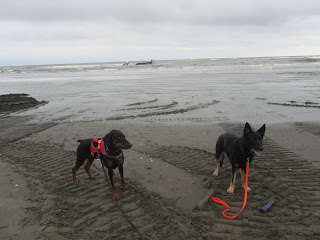 Nim and Jack as usual brought their party with them. Nim looks like Jack just said something scandalous in this photo. You never know. There was more people watching on the jetty and they had a good walk before Courtney and I went to Galway Bay Irish Pub for dinner. Oh man did I have a good portabella mushroom burger there. Had we not been so tired there was live music for later that night and a full bar. 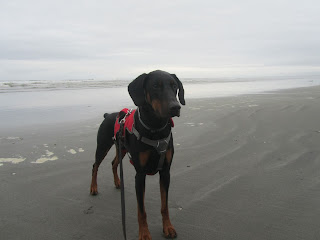 Instead we went back to the Sandpiper for a dusk walk, and beer on the porch. Not a bad night at all.
Posted by thequiltingdoberman at 3:51 PM No comments: