Yesterday we had our first serious hint of fall. Up until Friday, the week had been pretty miserable: it was warm, muggy, and not cooling off at night, but on Friday we finally, FINALLY cooled off and got some strong showers and wind. 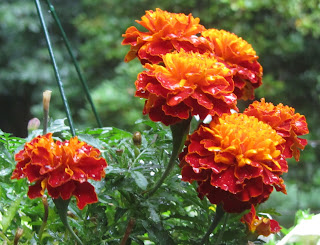 I took advantage of a cooler house to quickly cook something that I can eat over the next week. Had I gone to the store and actually followed a recipe it might have been a better meal but I didn't want to leave the house because: 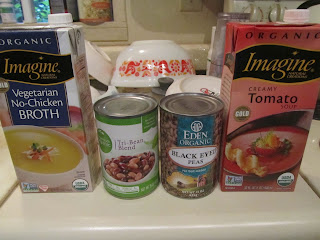 Since I can't seem to grow anything but tomatoes and beans this year, I only had store carrots to go into the base.

By the way, on Thursday night I did a sad "why can't I grow zucchini" search on the Internet. There is practically a support group for this problem. I did not know that zucchinis need both boy and girl flowers, and some fanatics out there actually do their own pollinating of flowers! 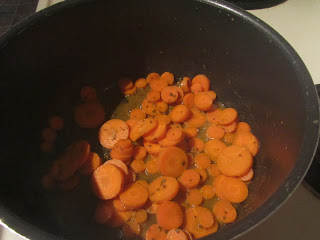 I will have to think about this. At least I can grow tomatoes this year, which also went into the soup. Except for those Roma looking things...despite their inviting outsides they were terrible on the inside. I have no idea what is going on with them. 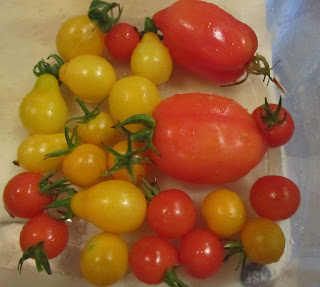 Every time I do a "kitchen sink" soup project I think of my Dad and that is not a good childhood memory. Hahahahaha. But clearly I have the same desire to throw a lot of things together that is reasonably edible, but with a lot less black pepper (sorry Dad). 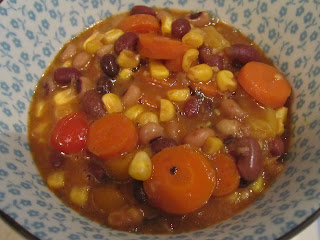 Anyway, while I was cooking and studying, the rain came in and it just poured. Leela stationed next to the pellet stove in case, and worried. 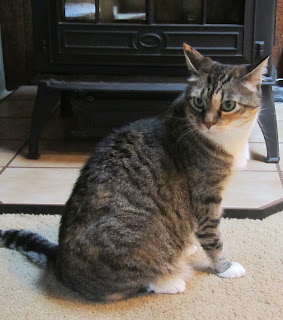 Eventually she stationed next to Nim. I think she has this hopeful thought that he will save her. 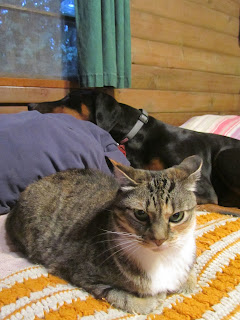 Posted by thequiltingdoberman at 10:17 AM 9 comments:

I tell you, this bear is pushing it. This has been my worst year. I have cleaned up so much neighbor garbage out of my yard. 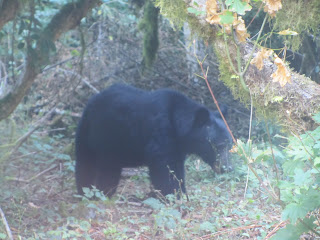 And now, not only is he disagreeable to photograph (which I respect because he really shouldn't be comfortable in my yard anyway) and a litterbug, but on Tuesday he took out a section of my fence. :| 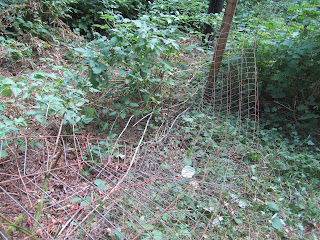 He basically pulled the section down and stomped all over it. If there was any doubt in my mind that the bear did it - he left big palm prints in the fenced area. 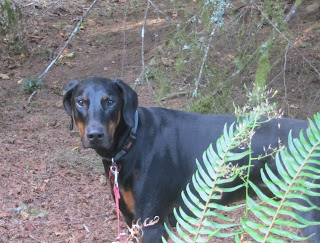 Nim says he didn't do it.

The section he destroyed is not actually the section I have been watching: 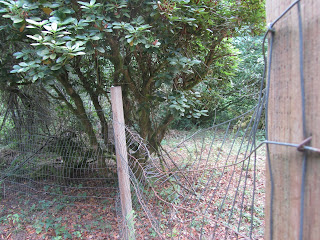 For the past few weeks I have been going out it the morning and pulling this section of fencing back up, which is harder than you might think and the fence looks even trashier than before. As you can see, he was pretty hard on this area on Tuesday night as well. I wasn't positive it wasn't the elk with those dark bibs on their necks. I was finding black fur on the fence but no evidence of what a elk might be eating.

Unfortunately the plum tree deposits some of the plums within the fenced area and I don't always get them all cleaned out in time. I now can say it is definitely the bear doing this damage. 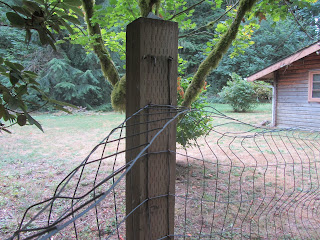 Nim stood watch in case a neighbor chicken perhaps wanted to jump into his mouth while I cut and stretched fence. The replacement fencing I used is thinner gauge which is unfortunate given a several hundred pound bear, but I can carry the roll myself and wrangle it and so that is the way it goes. 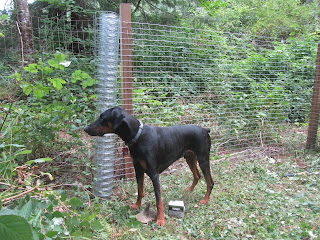 I also cut back all the salmon berry in that section as I suspect the bear used to leverage his approach (there is no salmon berry on the side he has been pulling on). I had been on yard work restriction due to a tight studying schedule, but I would really like to make it harder for him to take down the fence again.

No denying he is beautiful... 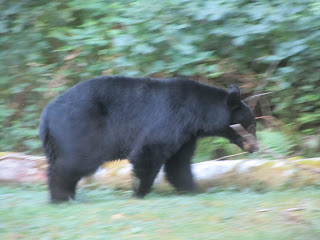 Posted by thequiltingdoberman at 4:06 PM 5 comments: