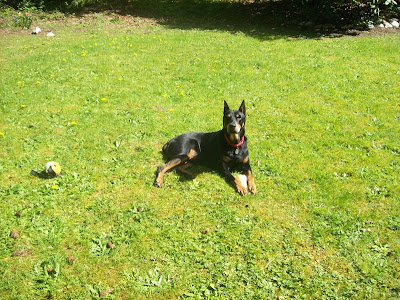 This morning Rusty was in the bathroom with me while I was brushing my hair. I couldn't figure out why he was in there with me (most people's closets are larger than this bathroom so having a person and a dog in there is tight) when suddenly he started barking at the ground and pouncing and stamping his feet.

Once the fly was dead (I have no doubt it was a very evil fly), Rusty picked it up in his mouth, did a death shake, and spit it back on the floor. If Rusty can kill spiders like that I will forgive all the offenses against my home and my car. 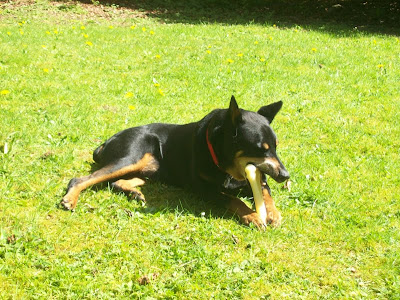 I got him a new Nylabone for the yard to see if it will help him settle a bit while I do my yard work and it seems to be helping to encourage him to take some breaks - eventually I kennel him in the house so he will rest that body.

Every once in awhile I would hear some galloping and there would go Rusty; chasing some bug. When he runs it is sort of like watching a pig run - very stiff and ungraceful and very entertaining.
Posted by thequiltingdoberman at 4:30 PM No comments:

The 3 barks of Rusty 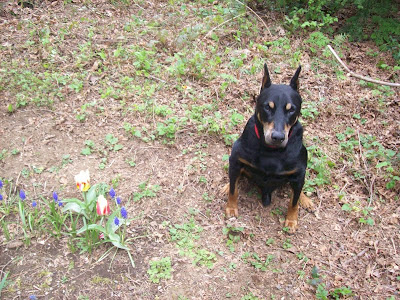 Today when I let Rusty out of his kennel I was getting stuff in the kitchen so I let him go on his own and he continued to head to the door. I heard the familiar sounds of him clipping the broom and dropping it (he isn't a straight walker), complete silence, and then a bark.

I rushed to the door (I can't see the door from the kitchen) thinking today is the day...he is going to bark to go out! Then I came around the door. The broom had fallen across the path and Rusty was on the other side of it (generally when he drops the broom I am with him so I just prop it back up) ; ears flat, eyes squinting and tail rapidly wagging - the doberman standard "I hate this - you fix it." He had called me.

It was then I realized that he has at least three barks I can identify as different: one for me/uncertainty about where I am, one for things like the cats and chinchilla and one for the start of a car ride. It was a great realization for me because I have so little tolerance for dog barking I just tune it out and ignore it - rather than trying to understand it. Rusty's eye contact and responsiveness is really coming along. He actually sat in front of the gate and turned to look at me on his own - I see his future in posing with my quilts is shaping up nicely. He is a little more wobbly today because we spent too much time in the yard Sunday. In the top photo he is next to the tulips he destructed. Similar to in the house, when he finally gets bored (takes much longer in the yard) he starts seeking out something to move or destroy. 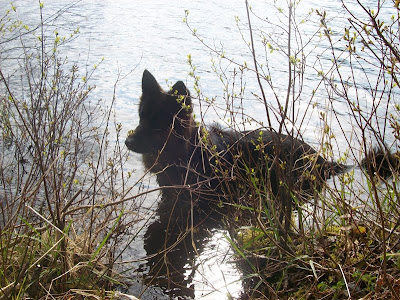 The visiting Shepherd went home on Sunday. I never did mix her and Rusty again, but it worked out fine keeping them separate. I am glad it wasn't a permanent thing. 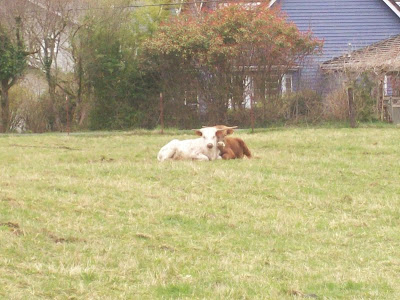 Notice the cows; living the calm life without their bossy bull.
Posted by thequiltingdoberman at 5:13 PM No comments: 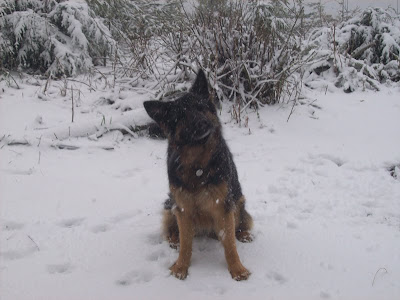 We experienced a hard weather day today. Knowing what the day was bringing, I tried to get up early and head out to Stan's Overlook get us into some snow before the really hard wind and later showers came in.

Unfortunately we did end up hiking a fair amount of it in strong wind; but we also got our snow hiking in - which might be her favorite thing. 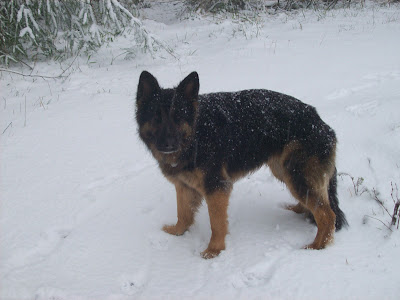 Posted by thequiltingdoberman at 6:53 PM No comments: