It is certainly pink 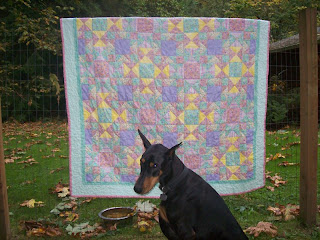 I don't think I have ever been so happy for a quilt to be completed mostly because it caused so much problems I was just glad to be done with it.

The pattern is called "Second Honeymoon" from the The Quilter Magazine, March 2004. I am pretty sure I have worked on it on and off for almost 3 years. I learned a lot from this quilt. The fabric chaos is due to not having enough of any color and being too new to quilting to know how to plan for enough fabric.

I broke a ton of needles quilting this one for two reasons, one, failure to clip excess fabric at the star points (I think called rabbit ears?) ESPECIALLY important with thick flannel, and two, failure to adjust my quilting plan once I realized the problem so that I could avoid these particular thick points of fabric.

Anyway...it is DONE! And hopefully some little girl will love it a lot more than I do. :)

The quilting doberman enjoying the fall weather out on the North Fork: 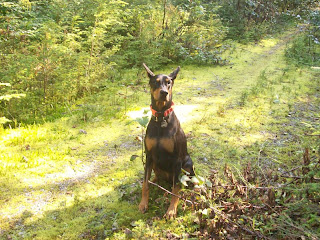 Posted by thequiltingdoberman at 6:19 PM