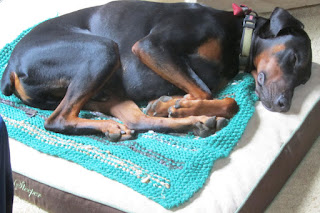 Meanwhile I made the Kale Cake I was thinking about doing all quarter long. As you can see I actually made baby loaves. 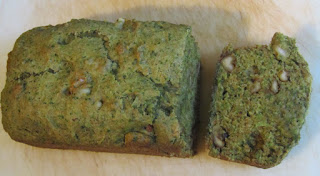 The kale cake is actually pretty darn good. I omitted the cream cheese frosting because I have never liked it, vegan or not, and I omitted the sweet potato filling because it just sounded too weird which I realize doesn't make a lot of sense considering I made a kale cake.

It actually would probably be very good with a white frosting and if I wasn't so anti-dishes right now I probably would have made it. It hints more towards carrot cake than zucchini bread.

My modifications to the cake recipe:
I did puree the blanched/shocked kale with all the wet ingredients before combining with the dry. I did it in a Cuisinart and it made every thing a nice green color. If you read the comments on the recipe page it sounds like if you don't puree you end up with a white cake with green leaves and I bet people really don't want to eat it then.

This cake also has held up well for storage unlike the "green monster" style baked goods I have attempted (spinach).

On to garden updates... 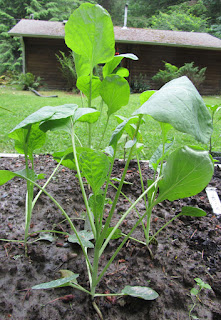 The above photo is my Brussels Spouts. They don't look right at all. I finally looked up how they grow and apparently this is a normal stage. So I will be patient. 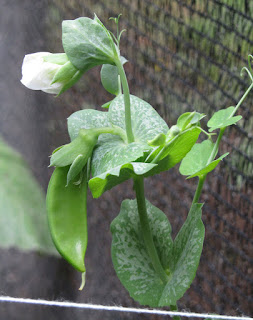 As you can see I have finally grown something edible! My first peas. 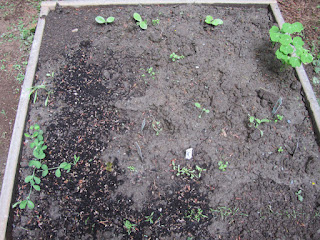 I have decided that the above box will here forward be known as "Nim's Garden." I thought as things started growing he might be less inclined to rearrange it. I thought wrong. At least things are still growing. 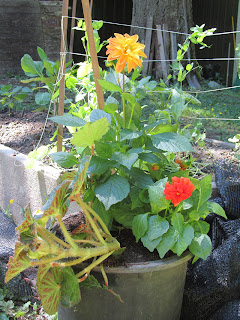 Today I had a special coupon for flowers I just couldn't let go to waste so I did three more flower pots. 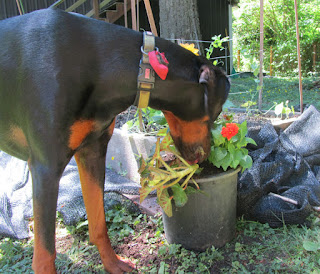 Nim helped, I think he is actually licking that one. 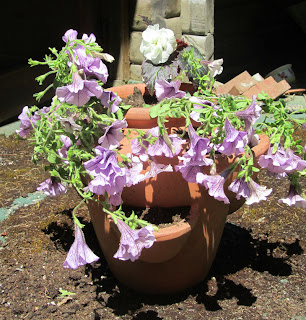 Mostly these are begonias, dahlias, and those purple ones are some sort of hybrid petunia. That pot is in the elk "flower throwing" zone as years previous have demonstrated so I am curious to see how they hold out. 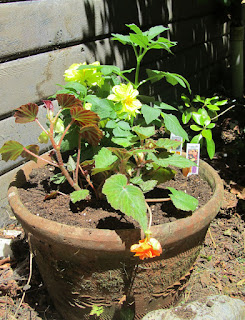 I finally took pity on Nim and let him in the house to sleep. He just won't quite settle enough in the yard and he gets so tired his eyes can hardly stay open.

As you can tell, we have some sunshine today!
Posted by thequiltingdoberman at 3:41 PM