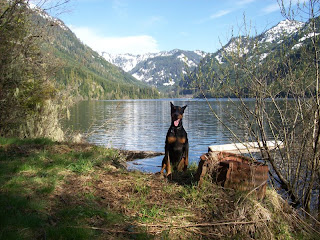 On Friday, May 16th, desperate for sun and to finally locate Calligan Lake I decided to get my map out and getting hiking. I know why I couldn't find it last time...it was because it was the uphill fork that I distinctly remember avoiding last time I was out there.

Mostly the access to Calligan Lake is a series of logging roads off the North Fork. The reason I mention it is because they don't note the mileage on the map of logging roads like they do of trails.

Had I bothered to figure out before we headed out that this was going to work out to about a 16 mile or so hike I probably would have re-thought the large mexican food meal as well as the little joy driving I did prior; resulting in a late (2pm) start for the hike.

But, we still had fun. The quilting doberman with hiking friend on an old abandoned bridge over the Calligan Creek: 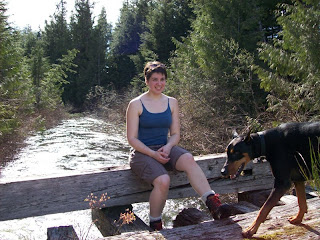 I believe it was about this time that I noticed the mileage situation. Sadly this bridge probably would have been the fastest way to one end of Calligan Lake; however, just past the bridge was about 1 - 2 feet of soft snow on an abandoned road and I was feeling wimpy because I was in shorts; so we had to backtrack and probably add at least another mile on. 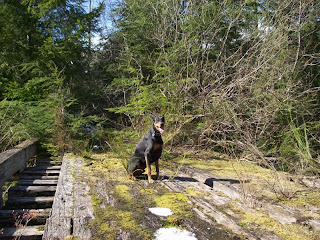 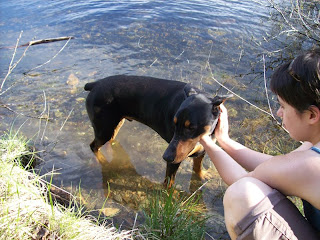 We hardly had time to spend at the lake as it was after 5pm and I knew how long we had to go to get back. It was beautiful though.

The quilting doberman in his own little road swamp on the hike back out: 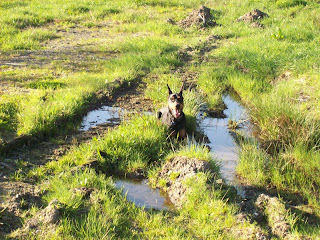 Posted by thequiltingdoberman at 4:29 PM