Quilt Progress (give me strength)

I had every intention of finishing the quilt this weekend (totally doable) but my schedule ended up completely off and I didn't get it done.

At least I did have some time at home to make progress. My first attempt at the full quilting process in the general living area with cats nearby  has proven to be at times frustrating and at times funny.

Everything sewing related has become an obstacle to steal (LOTS of theft going on), chew, jump, or hide in. 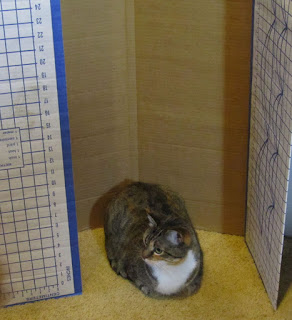 The measuring tape is a hot item. I rescued it from Leela (who used to drag a stuffed hippo that was larger than herself around the house and stash it), only to watch it immediately start to disappear off another corner of the table.

I looked over the edge table...yup, Emile. 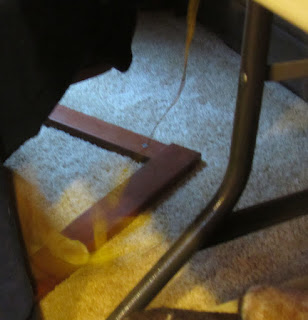 Other hot item: the scissors. Perhaps Emile will lose those last pounds in exercise. 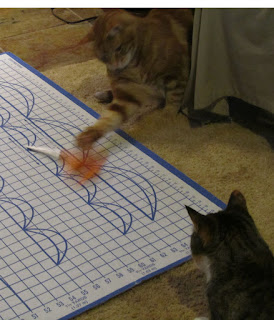 Leela is always present. She has no problem being in my space and taking what she wants. Emile is stealth attack.

Leela enticing Emile for an attack: 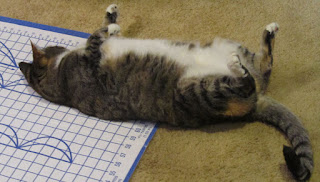 The above photo was followed by some jumping and hissing.

Leela supervises my every move while contemplating what she is going to touch or take next. 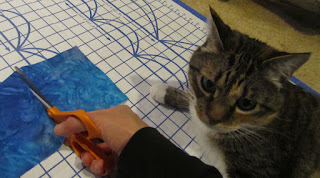 She also has this roll technique to get under the cardboard: 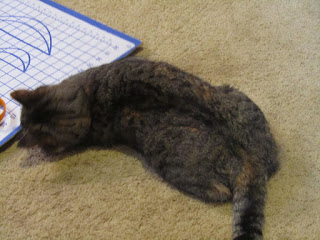 Regardless if I have something carefully laid out on the cardboard.

Leela also invited Nim to get on there with her which he had no problem doing. She can get a really fast scamper/spin going on the smooth coated cardboard which is attractive to both Nim and Emile and sends anything on the board flying. Grrr! 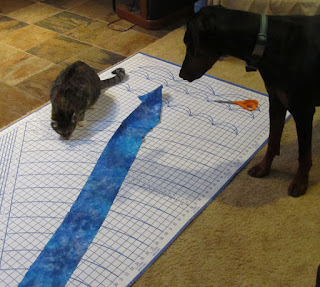 Despite a ton of interruptions that were either too blurry to post or too fast to capture the top is done. I should be sandwiching later this morning and getting the quilting going. 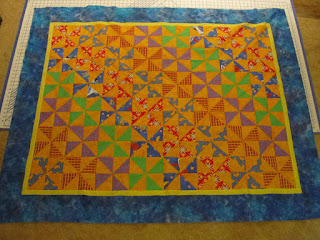 It is dark, rainy, and cold out here. Have a great week!

Posted by thequiltingdoberman at 8:53 AM