My original plan for today was to head out to Vantage, WA (about a 2 hour drive for me) and explore the Wild Horse Wind and Solar Facility. When I saw the forecast this morning in Vantage called for thundershowers I dropped the idea. Maybe next week. Vantage, WA is more or less a desert and is probably one of the last places I want to be hiking during a thunder and potential lightning storm.

So instead I tried two recipes that have been on my list all quarter long. One was a Roasted Cauliflower Tart with Walnut Crust and Creamy Lemon Filling. 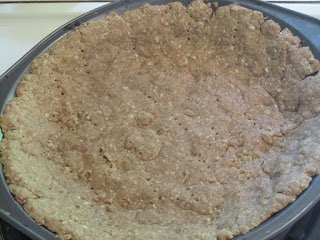 Can I still call it a tart if I make it in a pie dish? Probably not.

I ended up having to strain the filling before I put it in because it was soupy rather than creamy. I am not sure what happened, but maybe I didn't caramelize the onions enough? The good news is, it still taste good. 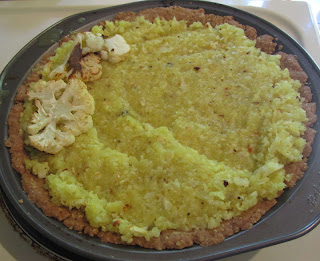 This is a very good dish with a fairly simple ingredient list. I would probably personally go stronger on the lemon, although that would not help my liquid problem. If you don't like onion you probably aren't going to like this dish, but I would definitely make it again. 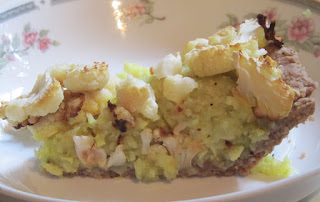 In the dessert category I have had my eye on a kale cake recipe (oh yes) and this Zucchini Brownies recipes. I had zucchinis in the house, so that made the choice for me. 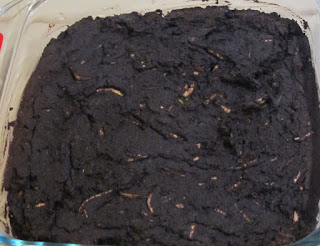 It is a very strange recipe. I think it depends on your opinion of coconut flour which I am still on the fence about. I find that it does better mixed with something like almond flour. But in the case of these brownies with the coconut flour and possibly the coconut oil you have something that actually suggests more of a German Chocolate Cake. Anyway, they are chocolatey and I have been eating them to keep up my energy for my sewing. 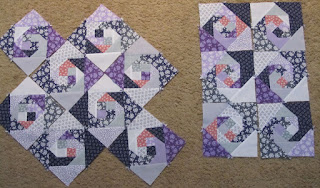 I am on the last "level" of these Snail's Trail blocks and it has taken me this long to realize I have some swirling one way and some swirling the other way. You can't even imagine how much this frustrates me, especially since I already did a fair amount of seam ripping of the second level for a different mistake and so I am not particularly willing to take apart roughly 1/2 the blocks.

At this point I am going to wait and see how many blocks I end up with of each swirl and create from there. Who knows, maybe they will be two quilts in the end. I do like the layout better with them up on point.

My school books arrived today for summer quarter. I immediately banished them to an upper shelf so I don't have to look at them again until later next week.
Posted by thequiltingdoberman at 9:00 PM