The squirrels have taken to climbing the house below the window and looking in at me when they want me to put food out (I feed the birds...the squirrels benefit). The cats and Nim have been beside themselves. Sometimes the squirrel even do this in the middle of the night. 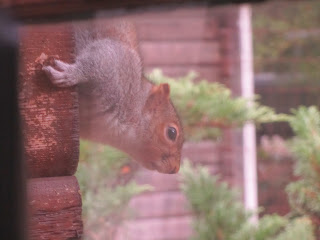 Since the creek is flooded the blue heron has been out daily. He is very disagreeable about being photographed. 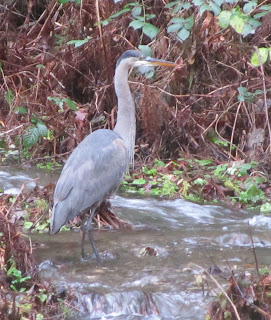 The only time I see little fish is during the summer when the water is far lower and more still, but who knows what else got stirred up? He seems to think something is worth it. 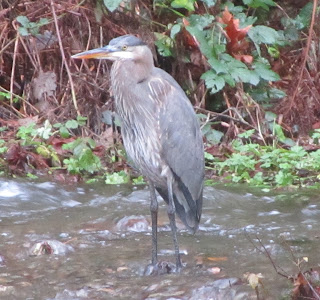 Nim wore the holter monitor Wednesday to Thursday. Thanks to all the rain I really had to keep him inside most of the time, but because we were over a year since the last one I really wanted to get it done. 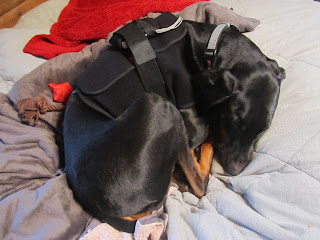 It is pretty amazing when you compare to this small digital monitor to the large cassette ones Odin had to use. 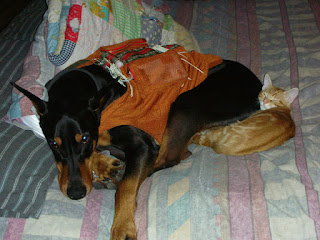 Nim did pretty well with it. He really really doesn't like the electrodes coming off. I said last time I was going to set some adhesive release and I really think I need to do that. I don't remember Odin having this much trouble. Maybe I have forgotten. 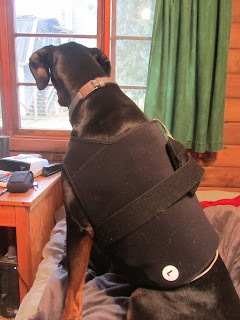 Nim on squirrel watch. :) The vest is definitely one of the better ones I have ever used. It fits well and I didn't have to use the extra tape around all the wires under it. I had the strap a little too tight as I learned when I fed him, but otherwise I think it was more comfortable than some of the vests. Hard to say since Nim can't let me know, but I hope so.

Posted by thequiltingdoberman at 9:09 PM