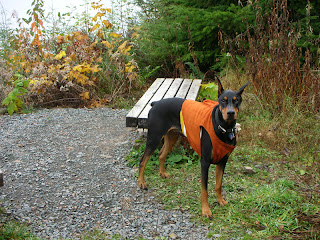 I was excited when I found out that I had an option to request the Holter Monitor from WSU and have it sent out to me to do it at home (compared to driving to Pullman and spending at a minimum over night out there). The reason being that I really wanted to run this 24 hour test in his environment.

Naturally I wanted part of his test to include one of his regular hikes. What I wasn't counting on was that it was really rainy today and the device can't get wet. Thankfully we had a break in the weather. Believe it or not, in the lower photo there is normally a beautiful view; including Mt. Si.; but the clouds were in thick by the time I got there.

I think the quilting doberman and I are both ready for this to be done. It wears too loose on him and so it moves around all the time. The device makes a recording noise (think the older, clunky tape recorders). I noticed he doesn't want to run as much which I think might be all the adhesive all over him that probably pulls when he moves.

That yellow sticking out is the vet wrap that slide off his chest. It was around the adhesive which is covering the 7 electrodes. I have a feeling a lot of hair will be coming off when I take this all off later tonight. 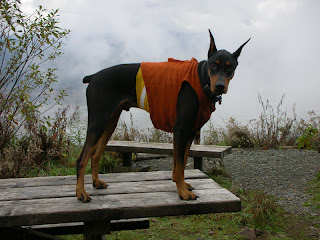 Posted by thequiltingdoberman at 2:34 PM