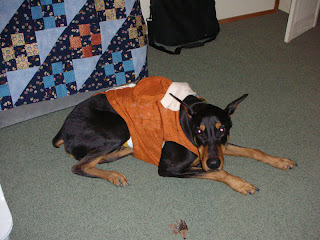 I would hate for my readers to think I was never going to post about sewing or knitting again! So the quilting doberman has been photographed in front of one of my other larger quilts in progress.

For the next 24 hours the quilting doberman will be wearing what you see in the photo. The orange vest covers 7 electrodes that are reading his heart and recording it to a device in the vest pocket. This is called the holter monitor. Over the next 24 hours I will be recording activity so that the vet has a comparison when they read the tape.

You might wonder why I would bother to do this. When my vet suggested this about a year ago I put it off. The quilting doberman has shown no symptoms and he is in extremely good shape. From my point of view that was an expensive round of testing on a perfectly healthy dog. It took the sudden death of another dog I know from a tumor in the heart for me to commit to the initial testing which was an ultrasound.

Dobermans as a breed, and unfortunately in the quilting doberman's family (mom died of it) are prone to a cardiac disease called dilated cardiomyopathy (DCM) which affects the heart muscle. The main reason to bother with the heart tests is that there has been some success controlling this disease with heart medication. It is not a curable condition.

The quilting doberman was started on medication recently which he will take for the rest of his life due to inconclusive; but suggestive results from his ultrasound test.

I have a lot of stockings to finish before Saturday. Look for another post soon!
Posted by thequiltingdoberman at 7:45 PM