It is very cold and clear out here this morning, although apparently not at freezing, it just feels like it.


All Natural Bully Sticks is doing a cyber-special. That is about as much shopping as I am doing. :) They do also sell antlers similar to what Millie was modelling earlier in the month. I almost tried them but they seem to splinter for the powerful chewers (which Nim is) so I decided not to chance it. 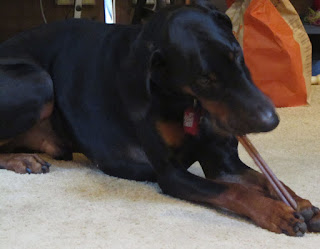 I pretty much came down truly sick like most of the world on Thursday. It really took out my weekend and one of the sorts that you simply cannot sleep because you are so miserable. By Sunday I was in a desperate situation I was so tired. After dog training in the morning I fought hard to keep awake until night so I wouldn't nap and really screw things up.

It gave me time to make a new soup for the week: Daily Garnish Kale and Roasted Vegetables Soup: 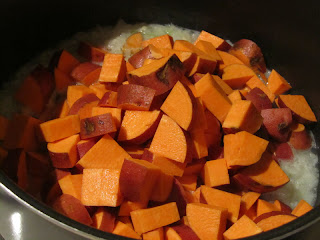 I didn't have rutabaga so I just added more sweet potato and as you can see there was no roasting going on either. My energy is low making me exceptionally lazy. Basically I started out the onion and garlic and then added the sweet potato. Eventually I added 4 cups of water (I often don't bother with veggie broth especially when I know I am going to blend a soup) and simmered until the potatoes were soft.

I do dry beans in batches and freeze. I didn't have black, but I did have black-eyed peas (my favorite) so they went in with the kale. Then I added the cumin and salt and did some blending. It came out great! 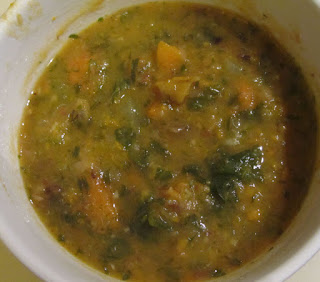 Another recipe I would definitely recommend. I am eating a lot of soup right now and the less I can do from the can the better.

We did get out for a "training walk" yesterday as well. I am so adamant that we are going to be able to succeed in the rally obedience events next year that I try to get us out at least once a day for about 20 minutes of practice. 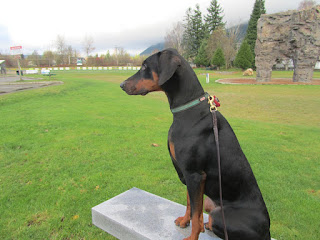 Have a great week! We have some cold but dry days ahead so I am hoping for some hiking.

Posted by thequiltingdoberman at 8:22 AM