Good morning! I want to sew right now but I have too much other stuff I need to get done. Arguably blogging is not one of those items.

My fabric more or less survived the night with minimal rearranging, but Emile did eat several of my post-its that were marking piles.

I do want to do a post about our Fun Run and Family Dog in Kent, WA yesterday. Cindy came out to support and film us. Nim loves her. 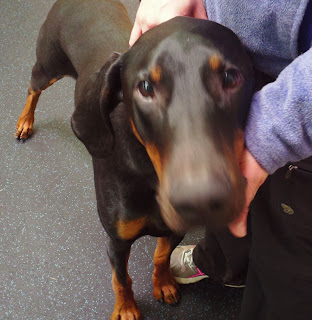 The Family Dog facility is nice and the people were helpful. The woman running the Rally ring handles Bernese Mountain dogs and she was a pleasure to watch. She went into the ring twice and I really watched her because she is handling a tall dog as well so it was good for me to watch how she works. She was a very clean and quiet handler.

It was somewhat tight moving between rings if you have a dog with space issues, but everyone is pretty professional there and to be honest it isn't much different than dealing with a show environment in that regard. All of us really were focusing on the same stuff and really supportive of each other.

There were three rings going: 2 for obedience and 1 for rally. I enjoyed watching the obedience quite a bit. I wouldn't mind trying that out next time I get a chance to attend.

We paid for 2, 5 minute tickers. I had never done this before and thankfully a handler went before me so I realized that basically the ring is yours for 5 minutes.

I have added the links for the two videos for the day. These links are actually more for me from a journal perspective and they might be kind of boring and long to watch. If you were going to watch one, I would watch our second time in.

Big thank you to Cindy for filming, supporting, and giving Nim all the attention he demands.

Posted by thequiltingdoberman at 9:38 AM