This morning after a bit of job applying I got nice and stressed out from one application (if it wasn't ridiculously unprofessional and totally unhelpful in my job search I would really let loose on some of the systems out there), quickly shut it down and turned on the Christmas music.

This may have also involved singing and dancing. Confusing to Leela, exciting for Nim.

And yes, that is a pair of pants on a chair drying.

Let's talk about yesterday instead.

I actually wore an apron which is not normally my thing. However it satisfied my need to wear a dress and worked well with the rubber boots. The rain has been relentless and my yard is nice and soggy. 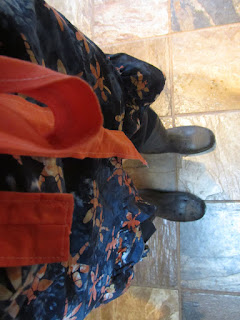 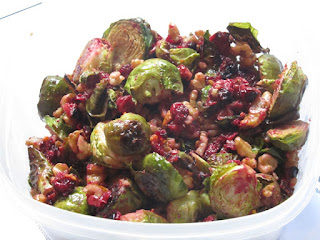 I have been on a bit of a Brussels break, but this is an incredibly good dish. I can eat an expensive amount of Brussels Sprouts and the tartness of the cranberries actually slows your consumption down. I even did the orange zest part which is one of my least favorite things to do.

I also made this really good Mushroom Millet Soup. I halved the recipe and it was still a ton of soup. Today (day two) the onion flavor is coming in strong which is good to me. I also probably went heavy on the onion. 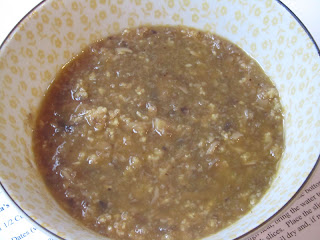 You will notice the Mushroom Millet Soup is paired with Cheezy Garlic Bread. Instead I opted to make this Cauliflower Pizza crust that I have been wanting to do for quite awhile. I will give you time to stop laughing at my results. 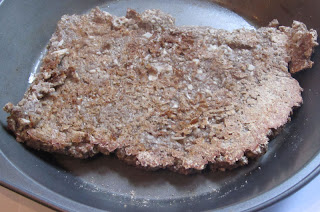 So I consider this attempt #1. I am not ready to fully give up on it, but clearly I ran into some problems and by the way while it is baking as a crust alone - that is not a good smell.

The recipe had the oven degrees in Celsius. While I know the world shouldn't revolve around the US unit standards I didn't notice until after 20 minutes when I thought it was odd that nothing was setting up. I then had a slightly heated, gooey mess but I wasn't about to waste a full head of cauliflower.

In the end it was salvageable but nothing I would serve others. Despite the smell it actually is a good taste and I will definitely play with this one again. 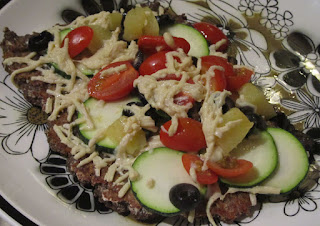 Cashews soaking for another project...have a great day!

Posted by thequiltingdoberman at 2:05 PM