I was going to do a post about quilting and chocolate cake but made a decision this morning to attempt Dog Mountain and so that is the post of the day. 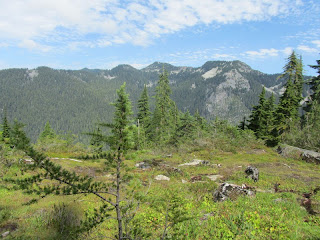 Dog Mountain/Lennox Creek is an abandoned trail that is accessible from the North Fork. (I also know that people attempt a Dog Mountain approach from the Middle Fork - I haven't tried it). I attempted Dog Mountain today fully expecting not to make it, but we did good.

This trail is also called Lennox Creek on some maps (like my Garmin Mapsource software). Over the years I have been on the abandoned road portion, but never made a serious attempt to complete the mountain. 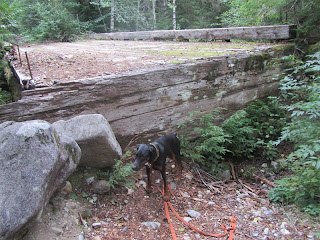 You start out parking at a very obvious road collapse that my dogs can usually climb up but coming back I have to lift them down. You could park at the Bare Mountain parking area and walk to this point, but I recommend driving up there and getting eyes on the area from the safety of your car. It is a camping/shooting/transient living area at times. 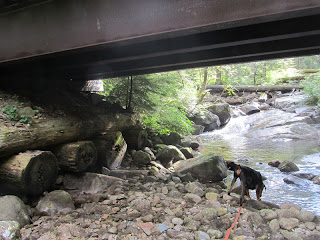 Can you see the old growth logs laying the foundation of the bridge?

We didn't find these sign posts for Dog Mountain/Lennox until the hike out. I couldn't find the signs. You don't even reach these posts until some mileage on the road. 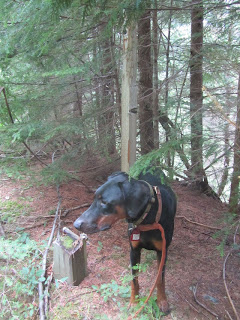 For being such a photo heavy post, I am leaving a ton of photos out. Basically, this trail is a fair amount of hard work. The trail is hard to find frequently and I did some tripping and sliding navigating it. 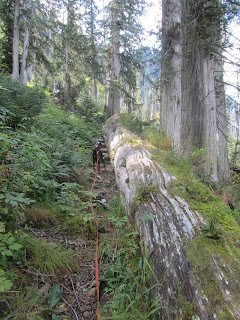 Sometimes you will find pieces of an obviously old trail, and sometimes you are on a boot path carved in a sloping hillside and covered in thorny brush. 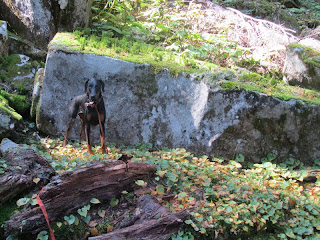 There were beautiful signs of fall and the more I climbed the more moments of beauty we found.

I greatly underestimated the mileage the road added and found myself frustrated with the constant switch backs that seemed to go longer than I thought they should have and no sign of the ridge line. And then suddenly we were in a beautiful meadow! My GPS was helpful enough that I knew I was on the ridge line altitude and at that point I figured we would go as long as we could, but that the hike had been an unexpected success. 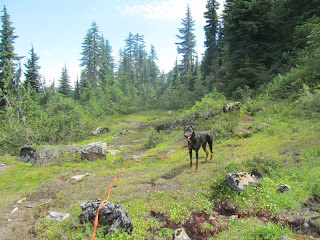 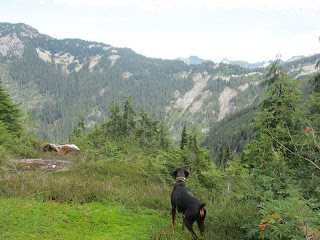 So in the below two photos I believe Dog Mountain is in the background. I decided this was our turn around point. We had worked hard to get there and I knew darn well what that scramble was going to involve. 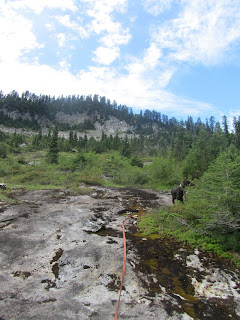 No complaints from Nim. 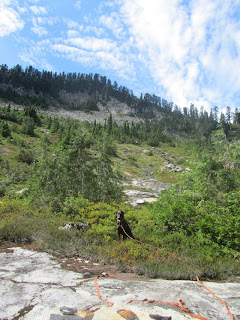 Happy boy at my side. 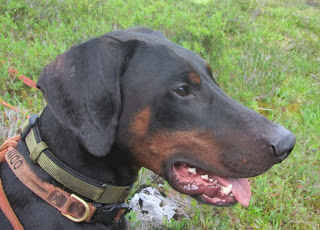 As you can see from our track we were just below Dog Mountain more or less when we stopped. Had I stayed on the ridge, I might have had a lake view or something, but I am fine with our turn around. The trek down was far worse than the trek up.

It was roughly 10.5 miles round trip according to the Garmin and by the time we made it back to the car there was thick drizzle fog and we were both super hungry. 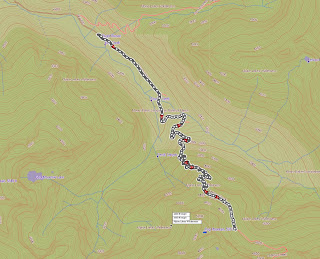 I really wish this trail would be salvaged. It is incredibly remote, but it would be a shame to lose it. Some abandoned trails people don't want to talk about so as not to draw the crowds, but this trail could use some public help.

Posted by thequiltingdoberman at 8:00 PM