The quilting doberman has been horribly neglected while my attention has been on rescue kitty; so today after getting work done I decided to hit a trail on the Middle Fork around 11:30am. I planned a short outing and on being out in time to catch a 5pm movie at the local theatre. 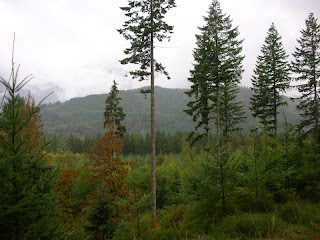 I knew the weather was risky; but it was pretty broken when we started with a bit of rain. First we went way down a road to see what happened when it turned into trail. Well what happens is that the trail ends in a horrible mess and you have to back track. It was on this trail that I slipped and fell on my right rear - this is important information for later.

So we went back along the road and decided to go up a trail that I never finish - and today sadly proved to be no exception. And to add to my frustration; because of this add-on trip I didn't get back to the car until about 5:15pm. But what was kind of funny is that the quilting doberman was acting up and running around in a frenzy being all silly and slipped and fell also on his right rear. I didn't really register it until he walked away all embarrassed with mud on that side. I believe you can tell in this photo that it was taken after he slipped and fell. 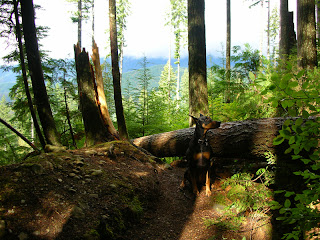 This hike is steep. It is so steep that you are rarely winded; you simply can't move fast enough (or I can't). Over half of the hike I did in pretty thick fog which was the "nice weather." In the last 1/2 mile or so the storm really kicked in with more thunder and freezing rain. Then finally at the base of the final scramble the lightening came and that is what ended my hike short of the very top. I couldn't get the quilting doberman to be in this photo because he was grumpy. We did get our first "white" of the season though, so that is kind of exciting. 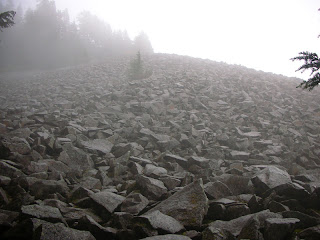 And since I know you are dying to know: rescue kitty woke up this morning feeling like a new cat (he was being completely obnoxious). I think between the medication, the food, and the water he is feeling a lot better. Everything is his plaything; the lights on the modem, the printer, the cords...me. 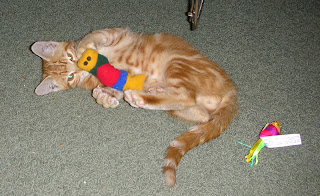 Posted by thequiltingdoberman at 7:06 PM