Happy soggy Friday to everyone out here. Some weeks you need a weekend just so the week will end...for me this is one of them.

Originally this post was only going to be for pumpkin butter. Yesterday as I started cooking I was constantly interrupted by the cats fighting. I finally realized the problem might be Emile off his morning blanket routine which is disrupted by my office (and Nim) now in his space.

I set up a blanket in his other favorite place: 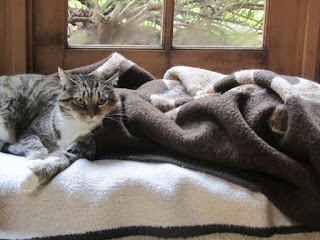 Emile under blanket, Leela next to him, all was right in his world, until... 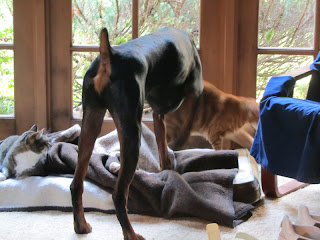 Then they resumed positions. 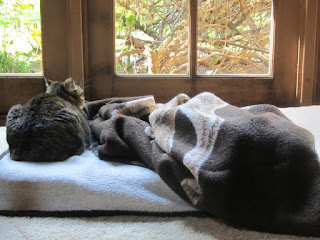 In the meantime I got my pumpkins and seeds roasted. The seeds have vinegar, pepper, and a bit of salt. The pumpkin butter recipe is: Oh She Glows: All-Natural Pumpkin Butter 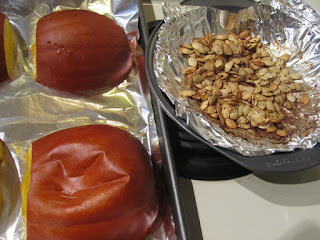 The recipe is very straight forward. I did 1/2 cup (single cup servings) of unsweetened applesauce because that is what I had on hand and once I opened it I decided to dump the entire thing in. 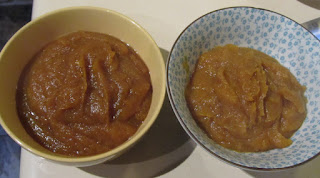 For the public I would make the sugar version. I was trying out cutting the sugar because frankly that is a lot of sugar, but without, the butter doesn't really caramelize or set the same (although to me, not as big of a taste difference as you might think). I could try next time doing the sugar first and limiting or not adding the maple syrup at all.

For me I would probably spice it up more. :) But either way it is a good recipe. Kind of like eating pumpkin pie filling without the crust.

Posted by thequiltingdoberman at 10:35 AM