A few years ago I remember a friend of mine mentioning tater tot casserole. I don't know how I got through life not knowing about this dish given my consumption of tater tots, however from the description it definitely wasn't vegan and I sort of forgot about it.

Then a couple of days ago I saw a post on a vegan version. I did some searching and didn't fall in love with any one recipe, but did get enough information to try it for myself. 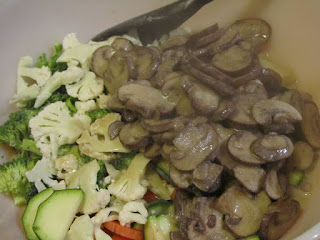 First I made Mushroom Cream Sauce by Daily Garnish. It is one of my favorites. It seems that real tater tot casserole often involves condensed soup.

I also went with fresh veggies over frozen. This was more of a practicality on my part because I wanted to go very heavy on the zucchini (two small-medium zucchini). I had some cauliflower, broccoli, and carrots around that went in as well.

I mixed in the mushroom sauce and put it in a 9*9 dish. After a lot of consideration I put in some Daiya since I also had it around. I don't think it is necessary though. 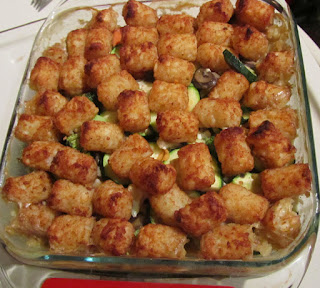 I baked the dish at 450 for about 30 minutes. Because of the fresh veggies it probably could have baked longer depending how obliterated you like your veggies in a casserole. This was perfect for me however.

Oh, and in a desperate attempt to put off homework even longer I almost made my own tater tots from scratch. Turns out when you search for "homemade tater tot recipe" you find things like this: Amazing aren't they? Does that say something about people that are drawn to tater tots?

Powered by tater tot casserole I then did accomplish a considerable amount of homework. I also heavily HEAVILY bargained with Nim who went into crisis mode last night from lack of activity.

I promised him if he would just let me work last night, that no matter what freezing fog had consumed the Snoqualmie Valley I would try and walk him somewhere.

So this morning I was up before sunrise to drag out the garbage and Nim was up bright and early with me. When he wasn't adhered to my rear-end he was keeping one eye on me. 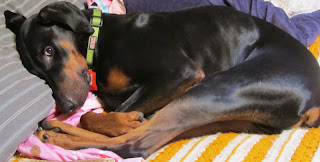 (A promise is a promise)

We headed out to Meadowbrook. He got to carry his long line and yell at the birds. 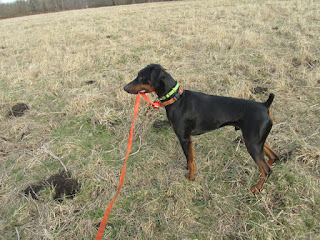 I was so hopeful that the frozen ground would let us sneak around this puddle into the next field but shortly after this photo we broke through and had to walk along the road a bit. 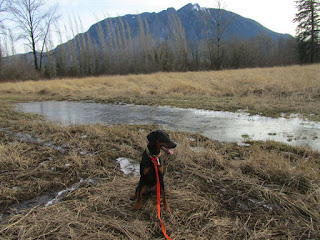 What I did figure out during this walk is that I step on him. A lot. And it seems that I step mostly on his left front foot (with my right foot). It happens when he jumps in front to face me and shake the long line at me. Sigh. 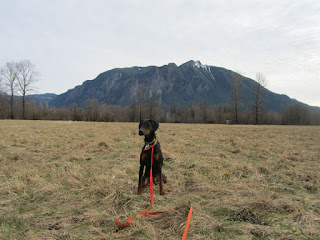 Now he is on the electric blanket and I am crossing my fingers that our walk didn't make his left front leg worse.

At least we have some gentle eyes for now...
Posted by thequiltingdoberman at 2:42 PM