I am done being sick now

I personally know people who got this flu way worse than me, but wow. I am done. Thursday was my worst day with Friday a close second.

Friday I think I was in bed, knitting, with two movies by 6pm. Nim did some good snuggling while I knitted. 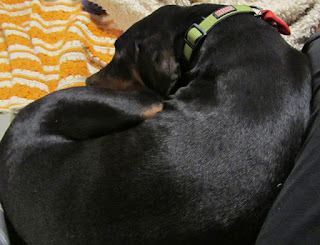 Rented movies were: The Dark Knight Rises and Looper. I have to admit, I am not a huge batman fan, but I like Christopher Nolan and many of the actors of his batman trilogy. Visually they are great action to watch and make an easy knitting movie. I wish I could remember the blogger that mentioned the sound issue, granted I am clogged up, but between masks, explosions, and weird vocal tones (hard to explain) it is a bit hard to hear what is being said at times. Anyway, it was a good laying around sick movie with lots of action and not a lot of thinking...unlike Looper.

Looper. Where do I begin with this one? First off, the kid in it kind of blows my mind. I actually stopped the movie to to a search on how they got some of that acting out of him, because those were some impressive scenes being basically carried by a very young child. This is a sci-fi film and it has some violence, but it has some very stunning visuals as well. I actually got really frustrated at the end, not because of the ending, but because I wasn't ready for it to be over. 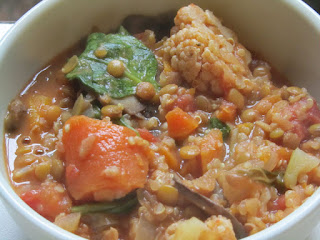 Today I made another batch of lentil soup based on the Chocolate-Covered Katie version. This time I was basically gutting my fridge of all the produce I am not eating because I am sick. I also added quinoa after about 45 minutes of the lentils cooking and of course coconut milk again. 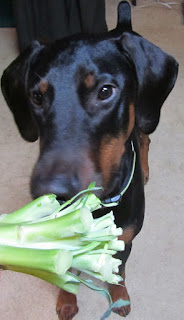 Nim's newest thing is the broccoli stalks. He loves them. There is some literature out there suggesting that if broccoli makes up over 10% of your dog's diet it will make them sick. Nim is a big dog so the stalk will be a blip in his calories, but I include this information for smaller or fragile dog owners out there.

I completely forgot to mention The Chocolate Shoebox bake sale in Seattle this weekend! This is their last bake sale as the store is closing. This one benefits Old Dog Haven (one of my favorites) and New Moon Farm.

I hope everyone is having a great weekend!
Posted by thequiltingdoberman at 8:15 PM