The North Bend area loves guns and explosions. We shoot when the Seahawks win, we shoot when they lose. On New Years Eve we mark every hour because you know, somewhere, in another time zone, it is a new year. I was hoping the fire risk would quiet the 4th this year. Nope.

I am really lucky actually all of my dogs have been fairly tolerant. It is still going to be a long day. It isn't like Nim passively ignores. The only thing that would make it harder is 90+ degree weather...wait a minute. Ha!

So last night, after looking at the next week's forecast I went on a late night shopping spree for more fans and just about anything that can be frozen that the pets might actually use. This was followed by an unceremonious reschedule of the CPA exam into August. August will be better right? Sigh. 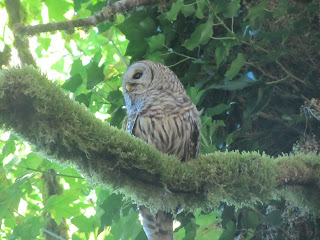 (The owl are not fazed by the heat)

Apparently (I interrupt this typing for a bang so loud that the house shook)....anyway...apparently the local owl population have a listserv and my address was featured as a hunting stop. I have never had a night quite like last night. 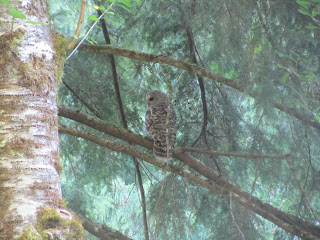 At 2:30am I was outside trying to get Nim to pee. I am fairly certain it was still in the 80s. The owl were so out of control that he stopped mid-stream and bolted for the house. Sigh. My tough dobie. I counted no less than 4 distinct different screeches going off at once. It was unbelievably loud and unsettling. Plus hunting noises. :( I think my bunny population took a hit last night. 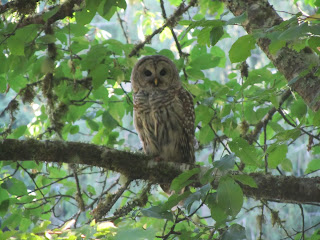 And by the way, these photos are from this morning. Two separate owl that I could actually locate. The bird population was freaking out. I have never seen robin hit owl like that. The robins were all on side branches taking turns running at her.

We were ALL up last night. At least in the house the 3 fans I have going drown out a lot of the hunting. I can tell we are moderately adapting to the heat because 80 in the house is no longer an issue. 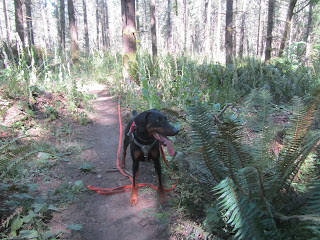 This morning Nim and I went to the Danville Open Space area in Ravensdale. Because I was so tired and he was too hungry we got a late start. We should have been out there before 6am which was my original plan. It is hard hiking at all right now - I really try to stay pretty flat and not push it.

Have a safe 4th!
Posted by thequiltingdoberman at 12:55 PM