Possibly the only upside to this unusually hot summer is that even gardeners like me are having success and having it early. My tomatoes are just starting to turn (unheard of for me to have a ripe tomato mid-July) and I have been picking handfuls of beans like this several days in a row. 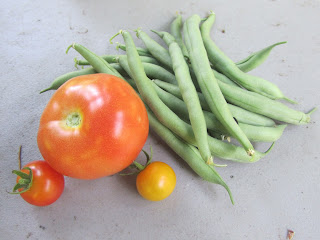 Once all my greens ripen, I am going to have an out of control tomato situation. I love yellow tomatoes. Love them. 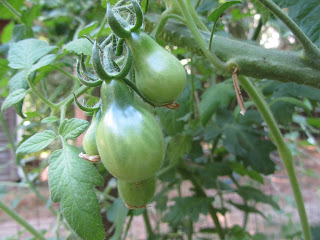 My plum tree is also out of control. This is just a snap shot of a much larger plum-littered area. I eat them when I can. The deer are doing damage, and I also suspect a bear. 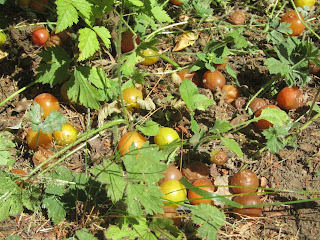 Yesterday Nim blew up much more than he does for the deer and I went to the fence to see what the big deal was (he and I were both in the yard - that is where I work at my picnic table). There was a beautiful bear in the stream. 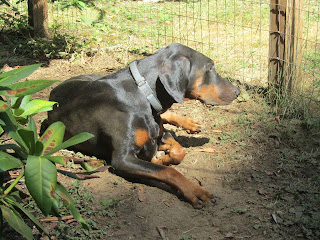 Then went back to his favorite dirt trough for a rest. :| 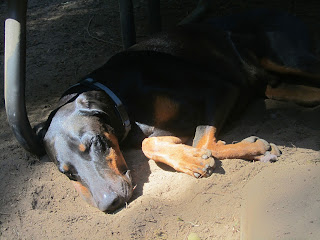 Later that evening I had Nim in the house, I was waiting for Well repair people, and doing yard work in the front area. I could hear heavy crashing in the back area of the property and assumed the bear was back in the yard.

I was right. He was actually up in the plum tree (which is probably where he wanted to go earlier in the day until he was foiled by Nim's big mouth and my presence), but didn't like that I had spotted him and came down.

Once again, I am torn about having fruit trees in bear country. To be honest, it is "feeding the bears" just like leaving trash out. The plum tree is on its own schedule and only fruits some years apparently when it is in the mood, but this isn't the first time I have had a bear go up it. 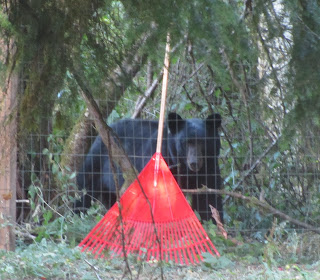 Anyway, I had watch him to see which direction he went to make my direction decisions. He sauntered back into the stream and I went into the house to watch him out the window. As you can tell, he knows darn well I can see him. :) He was panting a bit and definitely drinking and messing around in water. Everyone is hot. 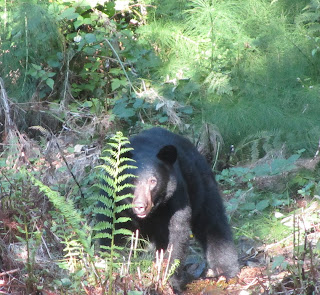 Posted by thequiltingdoberman at 9:35 AM