Hooray for Friday! We are actually looking at maybe some rain today. I predict the rain to arrive right when my repair people show up.

This morning I looked out and this bunny was in one of  Nim's beloved dirt troughs. That is his bear and deer watching one to be exact. Nim isn't allowed in his dirt right now because he just had a bath for some obedience competitions this weekend. I am glad the bunny put some time kicking and smelling it up for him. I am sure Nim will be thrilled. 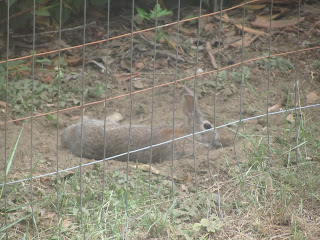 Although maybe the bunny changed the shape enough that it will be like the Simpson's when Homer's couch groove gets ruined and he says "You better put on a pot of coffee Marge, this could take awhile."

Look who is growing some antlers: 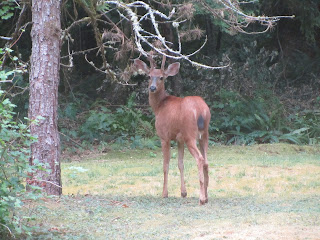 In other news the leak detector people came out yesterday and we found my water leak. It was pretty exciting actually. They push gas through the line and then you listen. It was crazy to stand in the leak area and feel the surrounding ground echoing (almost like a cave below you) - lots of water spreading out. After they left I rapidly dug the hole hoping to sweeten the deal so the well people would come out at night. No luck. 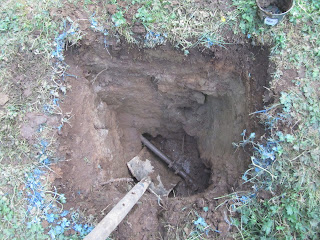 The failure seems to be actually at this joint or whatever you call the gray piece. And it leaks a lot. 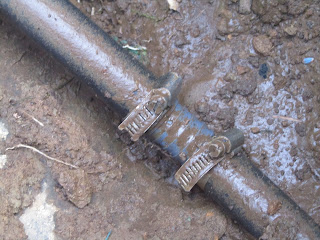 Without the dirt to slow things down, the hole instantly fills and overflows when I do turn the well pump back on and suffice to say what little water pressure I had before is way less now. So, the water pump is shut off and I am not going to turn it on again until we get this fixed. 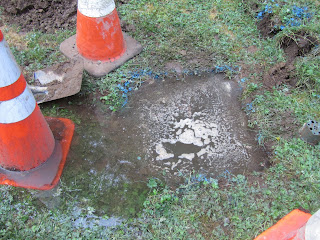 Hopefully they come this afternoon...before all the rain comes in. :)
Posted by thequiltingdoberman at 12:41 PM