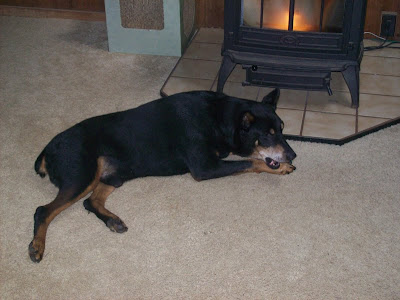 This is our 3rd weekend together and it was a full one for Rusty. Yesterday I had to meet up with large group of people and dogs and Rusty came along. That is a lot of car time, people, dogs and chaos for him to experience. All things considered, he did surprisingly well. He showed some dog attitude against a large male Shepherd of all things. I think it was a full day for him - I never heard a peep out of him on the drive home. 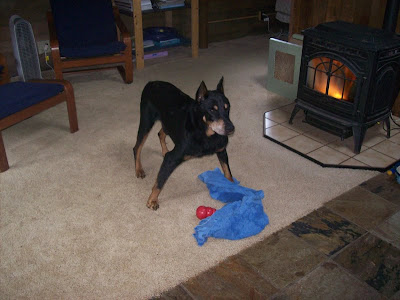 Today it finally stopped raining so I decided to try nail-clipping and bathing. He kept trying to take the clippers from me (like they were a toy), and I didn't really bring the nails back as far as I would have liked, but he got a treat per nail and he let me clip all of them.

He wasn't as knocked out with the shower. It is actually pretty hard on geriatric dogs to endure a bathing and he was pretty weak after it. He got some towel time which made his day since I have been trying to clamp down on his need to drag my laundry around the house. 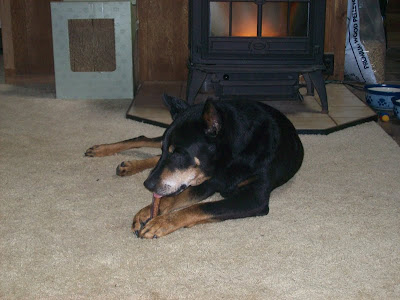 I needed him to settle down and dry so I brought out the secret weapon I have been keeping for him since he first came to live with me - the bully stick.

He was so quiet and engrossed in his chewing that Emile forgot he was out of the kennel. Emile attempting to backup... 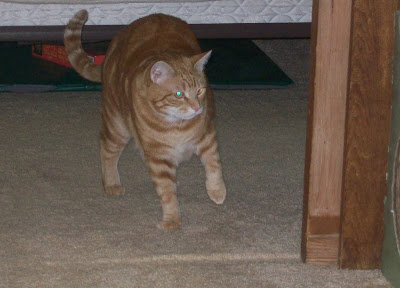 Posted by thequiltingdoberman at 12:58 PM