Squirrel in a tree 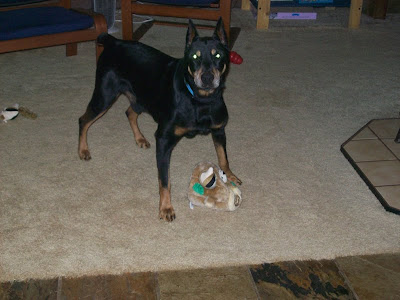 On Tuesday, March 16th Rusty went to the vet again for some follow-up and shots. Because of his weekend of social life and grooming he didn't want to stand at the vet which was hard to see. I was talking to the vet about what a shame it was that I couldn't physically wear this dog out without major repercussions so we discussed maybe some more puzzle style toys. Right after the visit I got him a treat toy that he likes and takes him some time and ordered a fluffy-style puzzle toy from KVVet...

Introducing Squirrel in a Tree (I think technically it is called Hide-A-Toy). At first I thought the toy was a failure since he doesn't actually hunt the squirrels out and extract them - in theory wearing out his brain in the process. Instead he just shakes the tree repeatedly, sending them all flying and then rolls the log around. As it turns out, shaking the tree followed by the rolling and chasing of the squirrels keeps him pretty entertained for a lot longer than his other fluffy.

He likes the darn log so much that he carried it outside with him to pee, holding the log the entire time, and back into the house. 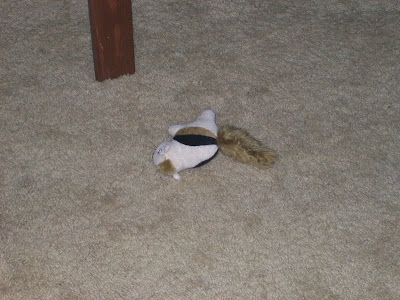 Posted by thequiltingdoberman at 8:26 PM