Friday. The Grouchiest Day of This Week.

But I decided that was unhelpfully negative. :) Suffice to say this has been a long week  and for whatever reason today felt the worst, but I got up and out the door for errands before Friday traffic and then a fabulous day of work planned. No wonder I was in a grump. :) 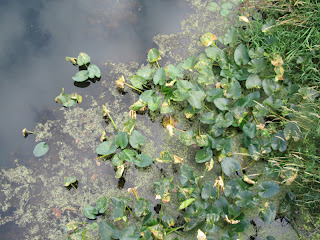 Initially as I left the gray and cold Snoqualmie Valley I thought to myself "well at least I can bring the dog without worrying about him overheating" (trying to be positive about the upcoming winter).

Since Nim was with me it also helped me decide at the last minute to stop at Blueberry Farms and get a quick walk in. 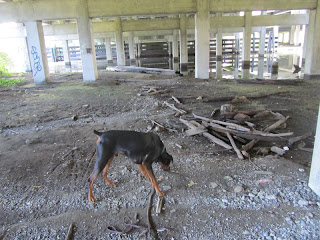 This time we headed the Mercer Slough direction. This is playing with fire because of the road-bikers on the trail but the skies were opening up more that direction.

In the above photo the wetland is going under the freeway. Nim was about as cooperative in that photo as an otter I tried to get for the blog earlier. 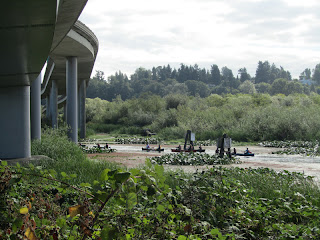 We watched a group of people in canoes head out. Later they would be a source of excitement for Nim. 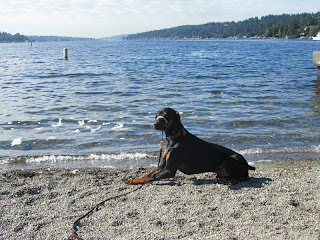 Basically we went the Mercer Slough route to Enatai Beach (Lake Washington) and then headed back. Nim was sure the water was going to come in and touch him. He also almost lost his head and went into the water after a buoy. I pretty much stood there and watched while he totally freaked himself out (needless to say, by Enatai my mood had greatly improved). 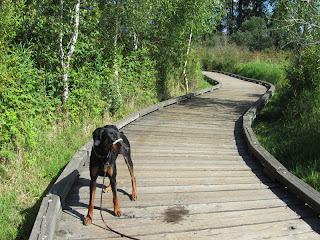 Finally we were back on the boardwalk trails around the Blueberry Farm. The people in the canoes caught up to us at this point. Turns out they were teenagers and eventually they were paddling right along the same trail as us - chatting away. Nim loves teenagers. He kept trying to get their attention by play bowing and biting the grass.

Eventually we made it around the loop towards a historical house called the Winters House (not photographed). I like this blog account of the Winters House because I totally agree, the thing is ridiculously ugly and unimpressive but part of a past history. 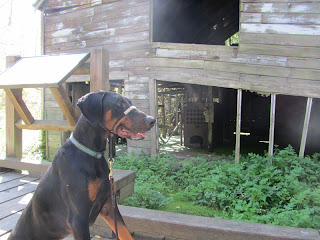 This is the remains of a boiler house that heated several no longer standing nursery buildings. 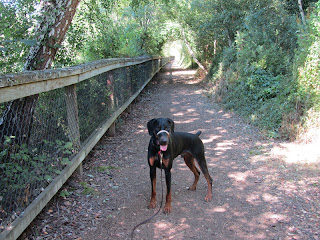 By the end of our walk it had actually gotten warm and I returned to the parking lot to find several people ready to fight for my spot.

Not a bad salvage for a grouchy morning and truth be told, I am more productive because of this stop.

I hope everyone has a pleasant weekend.
Posted by thequiltingdoberman at 3:00 PM