In an attempt to get my "runaway and escape life" emotions under control I came down on myself to fill my days with some productive tasks towards my road trip (you know, including work) rather than acting like any day I could just take off and never come back. 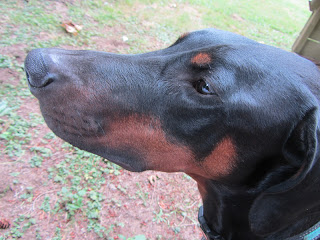 Nim as usual was no help. Since I am reading "Your Dog Is Your Mirror" I am spending more time studying his emotional energy rather than trying to direct it which is rendering him a touch feral. He is also probably responding to my runaway energy. 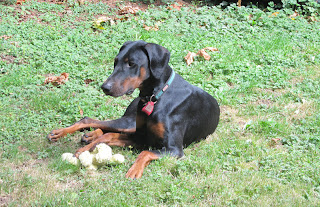 One of today's tasks was tent assessment. I located at least two of my tents and needed to see how they were holding out and if I was missing any equipment. Nim only got up to try and bite the tent poles as they were coming out of the sleeves. Since he isn't a puppy anymore I sometimes find the puppy moments funny. 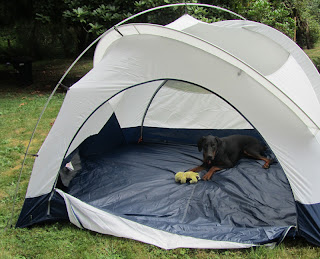 The large tent is more large than I remember and it is a good thing this is a car-camping focused trip because it is heavy.

Nim was highly suspicious of the one-man tent however and considering going through the back end to get his toy that I had throw in an attempt to lure him in. 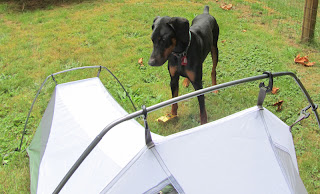 Eventually he got in. We will save this one more for the extending backpacking-type adventures.

On my own I am totally the throw down the tarp and sleep type. I hate carrying tents if I don't have to. With a dog however you either bring a tent to contain him or you sleep with the dog tethered to you. I have done this. It is about as fun as it sounds. 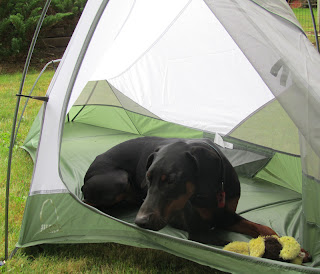 In other animal news pretty much everyone dog loving I know is talking about these two stories:

In loving arms: Man floats his sick dog to sleep, becomes Internet sensation
This one is going to probably make you cry. By the way, a single friend of mine yesterday finally said what is pretty much on every one's mind: this guy is the perfect man.

Not a dog related story, but I love this one. This husband/wife team have done this more than once:
Three bear cubs trapped in dumpster rescued by couple using a ladder and a truck

Have a great afternoon. :)


Posted by thequiltingdoberman at 4:15 PM