Yesterday I was ridiculously restless so I got some work done in the morning and then headed to Millersylvania State Park which is roughly 1.5 hours away.

Probably too long of a drive for what it was. I took a gamble that gas was cheaper down south which it is not, but still I am glad I got out.

What is useful to me about this park is that is close of I-5 and would be a nice stop on the road trip as opposed to rest stops (although I am getting good at figuring out which of those have "trails" as well). 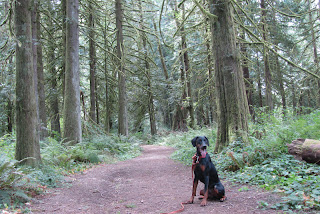 The history of this park is kind of neat. I wish the Web site had some of the photos up from construction time but it doesn't. The entire trail system was constructed by the Civilian Conservations Corps (CCC).

Very short history: the CCC was part of Roosevelt's New Deal in attempt to provide employment during the Great Depression. I believe it was men only and the CCC did a lot of conservation work that I definitely continue to benefit from. 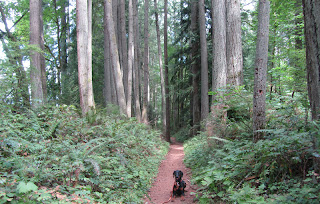 I have to laugh at my photos because it makes it look very beautiful like a lot of the photos I found online. The park is pretty, but not as impressive as the photos might make it look. 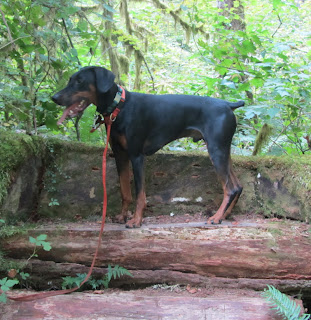 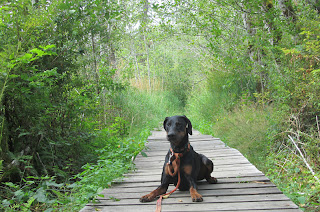 There was a boardwalk section through some wet lands. Nim hated this section and I don't blame him. The spacing between the slates was uneven and I held my breath watching his toes and foot occasionally fall through. 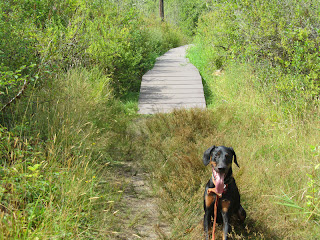 This section of boardwalk was obviously newer and more safe for a dog. 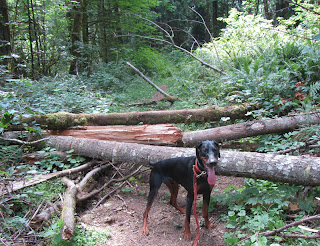 I added this photo of the blow-down so you can see that it is three trees, respectably spaced. At the last minute I realized he was gathering up to jump all three in one extended jump and stopped him. I highly doubt he would have safely cleared the final tree although he was in a jumping mood yesterday. 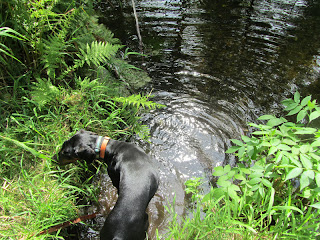 An entire safe and clean pond in front of him, which was all of 2 feet deep, and he stays at the muddy edge.At least he got in.

By the time we got back out of the trail system families were rolling in for camping and hanging out. We passed one group with a dog so tiny that although I could hear it menacing (ha!) it took me awhile to find it. We also got to meet this beautiful Rottweiler named "Hope" and her human. She was about 2 years old also and studied Nim a lot. 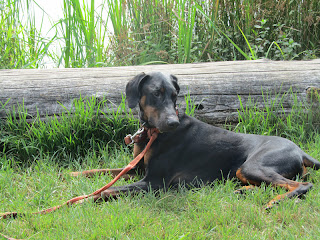 This was taken at the edge of Deep Lake which is also part of the state park. I almost asked a 7 year old to take my photo but her Grammy was a little wary of me (possibly the dog) so we just sat out there and enjoyed a bit before trying to beat the commuter traffic in Olympia and Tacoma.

I wish these warmer days would never end. It was still a bit too warm for Nim (probably almost 80) but if we could hang around the 70s all would be right. :) Have a great day.
Posted by thequiltingdoberman at 7:30 AM