Yesterday was probably the last of the really hot days of our summer. I did get some sewing done, but not very much.

I think I will like these blocks better spaced rather than next to each other. It helps with the busy fabric. 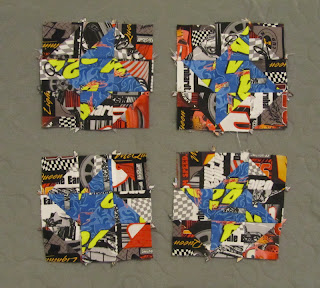 I will have a home for this quilt too. We have had wild fires to the east of me (still not extinguished) and a lot of people have lost their belongings, their pets, and their entire homes.

Taylor Bridge Fire Quilts has been started to collect and assemble quilts for distribution to these impacted families. I might even try some of those house blocks...I definitely have enough scrap fabric.

I know from previous charity experiences that "boy" quilts are hard to come by. Not that I am saying there aren't some NASCAR girls out there, but compared to my two other pink options this might be better for a boy. 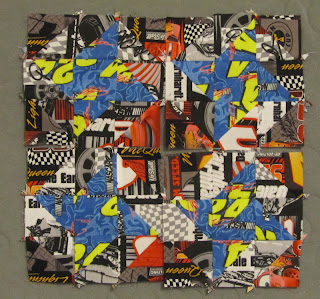 In dog training news I have started to expand my creativity as Nim will still not take a treat dropped from my mouth after a week of trying. :) (If I say "take" however he will go directly up to my mouth and take the treat that way - I use much bigger treats for this trick.)

The idea is that at heel-side I can drop a treat from my mouth and he will catch it (without leaving the ground). In very short order he learned how to aim his nose for optimal floor position as the treat fell from my mouth, rolled off his nose, and hit the ground. Much faster solution in his opinion. 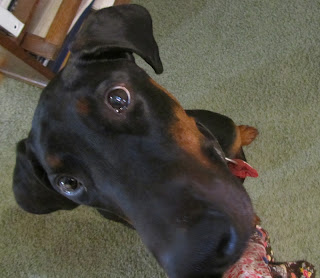 So yesterday I switched to popcorn. Seemed like a good idea at the time. This vegan was sick of holding cheese, dog treats, and various chopped meat in her mouth and Nim loves popcorn.

I thought I was super smart until I realized that popcorn actually doesn't fall out of your mouth as easily and had to switch to my hands which doesn't matter because he still can't catch it anyway...although this may have been the closest success. I also got more smart about rescuing the failed treat before he ate it off the ground so he couldn't self-reward when he wasn't catching.

He got so fed up with not getting the treat at all and me laughing at him that we had to switch to training he could succeed at. 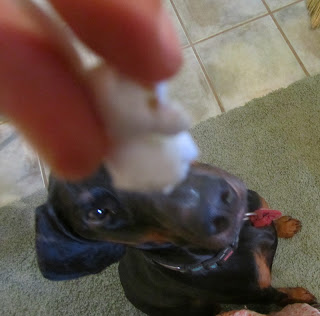 Emile progressed to crazy last night. I think he just couldn't take the heat. On the upside he has become an accomplished spider killer (I credit his diet making him more aggressively hungry) which greatly has increased my fondness for him. Between in this weather and my laughable window screens the bug population in the house is beyond unpleasant. 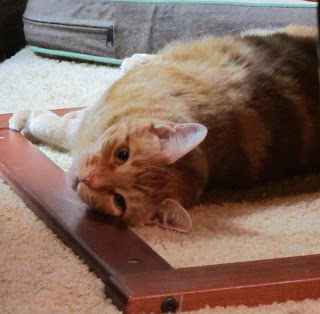 Back to sewing!
Posted by thequiltingdoberman at 1:55 PM