Friday I took a weather gamble that actually worked. I gave myself two choice: hike at sunrise, and write for the rest of the day, or write first and hike in the afternoon.
I elected to write first and finished up my latest assignment around 2pm. Then I ran out the door for a hike. The weather Friday was beautiful and a very welcomed break. I just wished we had light a little longer.

I broke my own rule and hiked on Mt. Si on a nice day, in the middle of the day, during a holiday week. Mt. Si. is a busy mountain and despite living very close I rarely hike it because of the heavy traffic. And unless it is before sunrise I pretty much won't touch it on the weekend.

I started at Little Si trail head, went up the steeper half of the Boulder Garden trail (I have learned from experience I prefer going up one side and coming down the other out of respect for my knees) and then broke off to hoof up the old Mt Si trail. 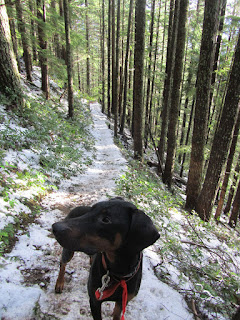 I didn't quite hit the top because of the snow nearing the top and lack of headlamp (even though I own about 5 of them not one was in my pack). This photo is on the way back down - it was too hard to deal with photos on the way up. Nim was on red alert due to the constant snow falling out of the trees. Some of his response was prey and some was flight...it was exhausting for both of us. :)

We picked up the Boulder Garden trail again, headed down, re-joined the Little Si trail and headed for the car. Most of the traffic was on the Little Si proper trail which I wasn't on all that long thankfully. 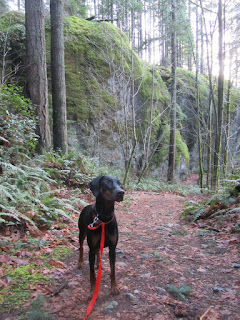 Have a great Sunday! I better get on my fabric selection for the mystery quilt.
Posted by thequiltingdoberman at 9:36 PM