Nim is not exceptionally happy with me on this rainy morning. We had a break in the rain and rushed out for a very unplanned morning hike which means he now has to wait longer to eat. 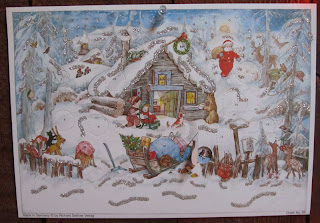 Yesterday was a very happy day for all of us. Cindy sent us a little Christmas package (including Millie's photo Christmas card which was super cute, hopefully she will post eventually on her site).

I was expecting an antler for Nim to try, but there was SO much more.

Once the paper was off, Nim could already smell the antler... 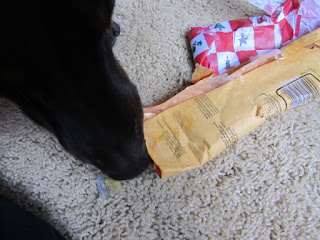 Meanwhile Emile had already taken off with the cat package. Clearly he could smell something I couldn't and we all know about his paper fetish. 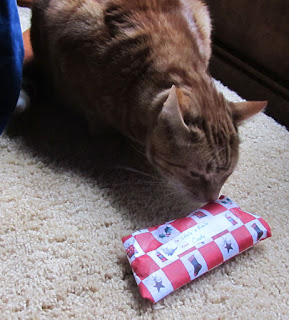 Nim was really into careful investigation, so I left him to his licking and sniffing... 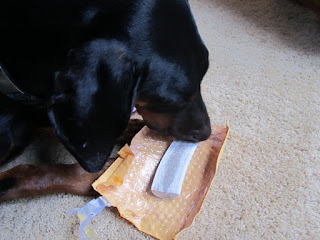 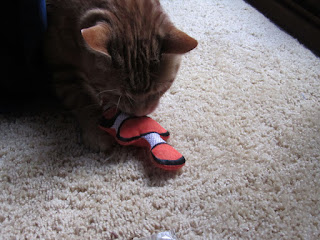 Emile got a couple of flings in the air before Leela came out of no where. There was some growling and then Leela had it which I actually think is what Emile wanted all along. :) 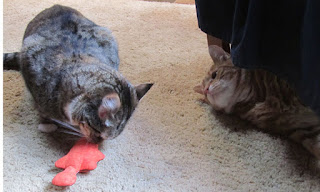 My poor deprived cats haven't had a toy since Rusty, followed by baby Nim came into their lives. Both dogs would eat and swallow the cat toys. This fish is actually a great size. And the cats were pretty funny in their trading off.

Cindy even sent me some Christmas fabric which I was really taken with. It is just fun to get selections from another person's stash. My photos don't do it justice, but there is a nice gold shimmer to both of them. 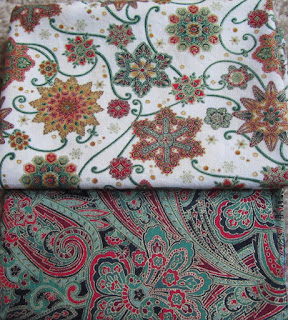 Leela and Nim got down to chewing business. I don't think Nim had ever seen this side of Leela. 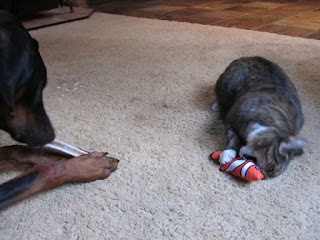 I agree with Cindy, antlers are comparable to Nylabones in durability. I was really expecting it to be more brittle and splinter off but so far it has been fine. 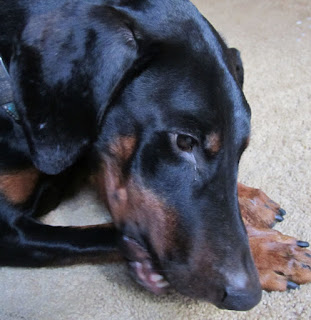 You can see the marrow is breaking down from his chewing. Definitely something I will order more of. It lasts longer than a bully stick and doesn't smell as bad. :) I better get baking. This wind has me a bit nervous and I actually have to bring food to a function later in the day.

Have a great Sunday!
Posted by thequiltingdoberman at 9:31 AM