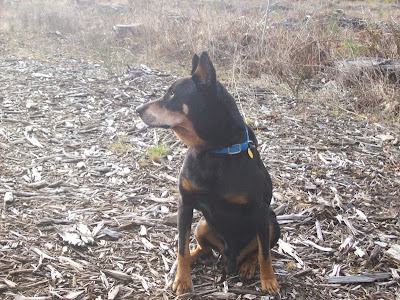 This photo doesn't show it well, but when Rusty sits, he is so built in the front and small in the back he reminds me of E.T. When he is really tucked tight in the morning it actually looks pretty funny.

He doesn't sit often and I don't ask him to because of the physical effort for him to do so. But he does sit in the morning on his own while he is trying to get his back-end to catch up or for the above photo because he was annoyed that I tied him off away from me to attempt to get a photo.

He has now been on the Metacam for a full week as of Monday. I give it to him at night so that he can sleep through the potential stomach upset and because its peak concentration is about 7.5 hours after dosage so I am trying to get him the most when he needs it: morning. Within about 48 hours of starting Metacam all the yelping while shifting/rising stopped (much to my relief) and mornings got better. His is gait sloppy and it takes forever for him to get up in the morning, but it is still a big improvement. 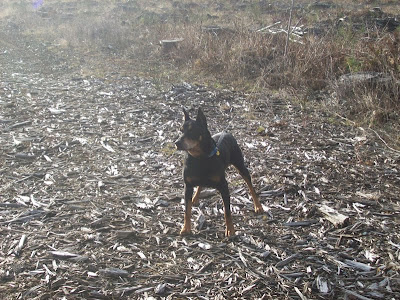 Posted by thequiltingdoberman at 5:53 PM