Nim ate a ton on this trip. His diet was a mix of Honest Kitchen Love (4lb box) and Wellness Super 5 Mix (15 pound bag). I had one serving of Love once I got home and maybe 4 cups left of Wellness.

His MINIMUM food amount (which was exceeded every single day) was 3 cups dry honest kitchen - hydrated, and three heaping cups wellness. The digestive problems he was having when we left was gone by day two and I kept his weight the entire trip. This isn't financially sustainable now that I am home, but at least I know that balance worked.

We got up early at the Perpetua campsite, packed up to hit the road, and almost immediately pulled out at the Strawberry Hill Wayside. 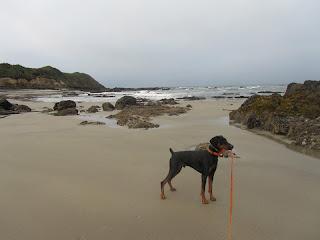 If you are driving 101 try to stop at this pullout. The tide was still considerably out and it was early enough that we had the entire beach to ourselves, except for many harbor seals. They were everywhere! 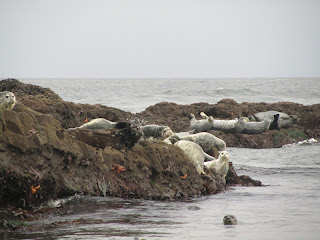 They saw Nim. I am not sure he could see them and I kept him pretty far back. He could hear them however as they would slide off the rocks into the water. 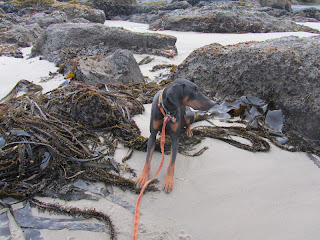 We eventually left the area and headed for Blacklock Point. Blacklock and Humbug mountain were two researched areas before I left that I wanted to see. Eventually I would have to drop Humbug, but Blacklock timed out and I would highly recommend it. 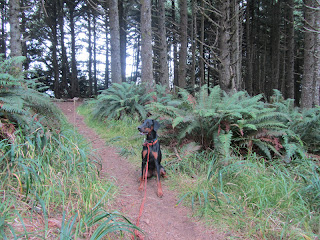 Blacklock location is not readily marked and neither are many of the trails. I really wish I had got a map of the area. When I parked at the end of the road there were 3 other cars. I never saw a single person out there. 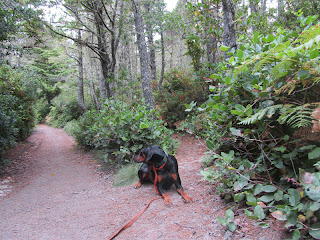 Unfortunately I ridiculously burned myself out on this hike. I think I even knew when I parked the car I wasn't feeling great but I am still glad I pushed as much as I could.

I wanted so badly to find Lake Flora and I would say I was probably pretty close when I decided to give up and turn back but this was the second hike in a row that for whatever reason I just wasn't feeling well. We still got to spend hours out there, but I have no idea how much of the area we actually saw. 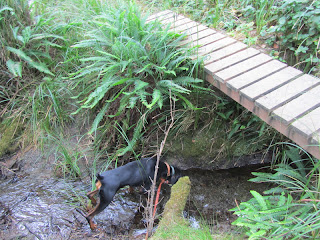 As you can see trail condition and terrain varies in this system. It depends if you are closer to the coastal edge on another section of the Oregon Coast Trail if you are actually fully exposed or if you are more inland. 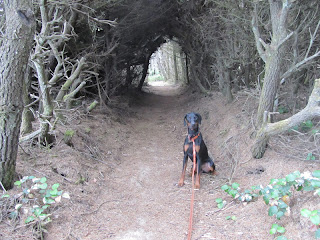 The wind on Blacklock Point was impressive. :) 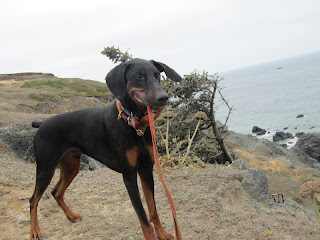 After I took this photo we did walk out a bit on the rocks behind him. No photos. We could have gone further but he was really uncomfortable out there and it made me nervous to have him out there.

This was an area that if I lived close I would spend a lot of time exploring the system. There were many trails I blazed by that who knows where they went or if they were just parallel trails. 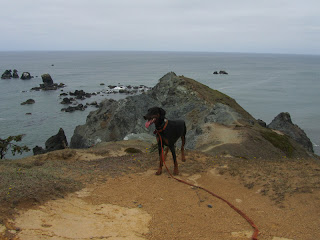 After Blacklock was when I decided to drop Humbug and head further south than I had planned for the day. It was the right decision. We would end up at my favorite campground for the entire trip: Harris Beach (Brookings). 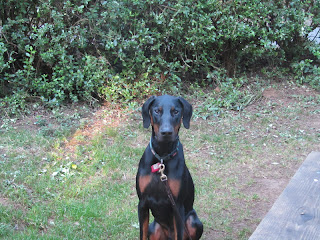 I finally remembered to take a photo of the tent all set up. This was such a nice campground. Nice community of people. I was beyond desperate for a shower at this point. So much so that I just told the gal at registration to pick something for me so I could literally park the car and run for the shower. THEN I set up the tent and headed into Brookings for all their food. 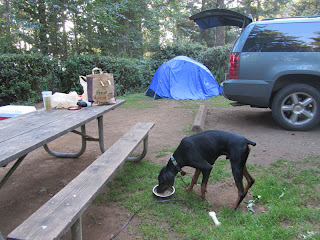 Harris Beach is gorgeous. There is something so nice about finishing dinner and just getting to head out for a quiet walk before bed. 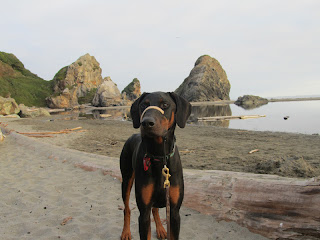 Everyone we talked to was really friendly. The RV world just amazes me. I saw one site in which I assumed the set up was for a ferret but then I saw the cat. The ones that RV possibly year round or very regularly are so used to socializing in new areas. I met a lot of really interesting people. 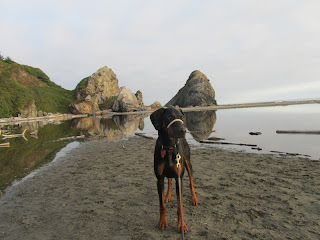 We both slept great that night in preparation for our trip into the Trees of Mystery...

Posted by thequiltingdoberman at 10:04 AM