Day 8 would end up being my return home day - and I didn't even know that when I woke up.

Once the sun came up after we left Beverly Beach I was ready to find a place to stop, walk a bit, and hopefully eat. I stopped at the Tillamook Bay North Jetty. There were very few cars/people out there, but pretty much everyone was there to watch the fishing boats. 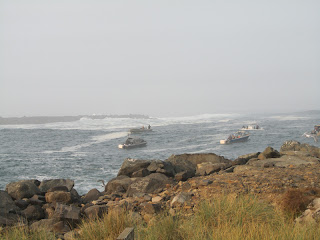 This photo doesn't do the waves justice. I think I felt a bit sick on their behalf (I get motion sick easily unfortunately). 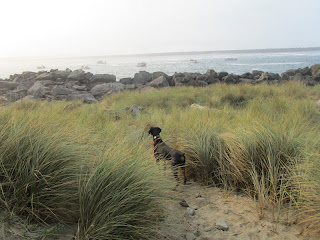 There is actually a campground back from the jetty. I am thinking they may have had a colder night than I did. I would be curious if that area is always a more rough area. Even down on the beach the waves were pretty rough, although I do think the tide was coming in as well. 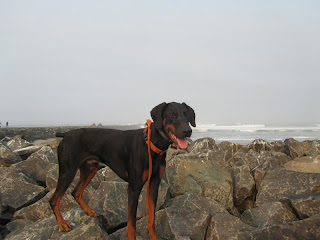 My next real stop was Seaside. I finished of my second jar of peanut butter and gave it to Nim (I saw this on another blog - great idea). 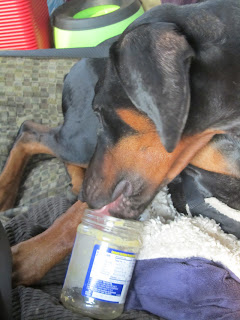 Seaside was decision making time. I liked Seaside a lot. Even the town is kind of cute. I am pretty sure I hiked in the area probably 15 or more years ago and there was lots of camping options. I finally decided to save Seaside for a different trip and head home.

(I was a little grouchy about the decision, but at the time I still thought I was getting into classes for fall quarter, which as it has turned out both my attempts failed so I am taking a quarter off. It feels weird.)

I ended up stopping at Eben H Carruthers Memorial Park in Warrenton. Basically I was trying to find another park to stop for a walk. It was taking forever to find this park so instead I pulled off at the first options I could find. From this park you can pick up a part of the Warrenton Waterfront Trail along the Columbia River. 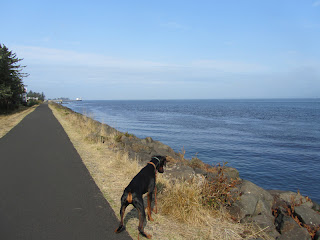 I really liked the Waterfront Trail except for a sizable section that kicks you out on a busy road. I hope some day they figure out a better option for that section. In the above photo Nim moved the grass himself, but still thought something was in there.

We ended up at a some port and it looks like if I had any clue what I was doing I could have picked up a further trail system in the Fort Stevens State Park (which by the way is what I gave up trying to drive to in the first place).

I watched a large container ship come through and then it was time for me to turn around and walk back. 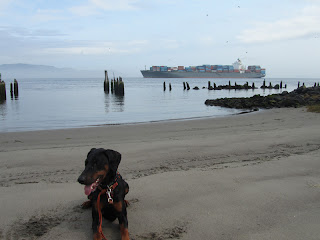 I was still in denial I was heading home.

The pelicans in the Columbia River by the way were very fun to watch. Unfortunately I am not a wildlife photographer.

Back over the Lewis and Clark bridge for the long drive home: 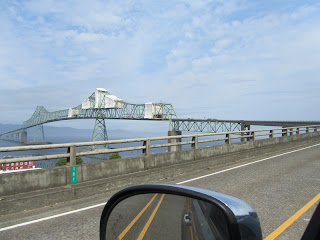 I love reading other blog accounts of travels and vacations (unless they fill me with ridiculous envy which on occasion does happen). Some of the ideas of where I went (or avoided) came from other blogs. 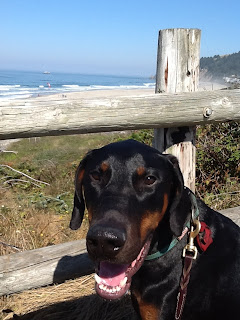 I definitely hope not to wait so long before I vacation again.
Posted by thequiltingdoberman at 1:08 PM