I forgot to add Thursday, after the Marys Peak hike, we tracked down a dog self-washing place called Dogz Rule Dog Grooming. It was a great place and the owner was really nice. An unbelievable amount of dirt fell out of Nim. The entire grooming area was open so you can wash your dog and chat with other dog people. :)

I didn't know it when I woke up, but Friday was going to be the Nim meltdown day. Considering all he had been experiencing we were pretty due.

I had planned on Friday being a little more light. We had a weekend-long training event coming and I wanted him rested.

The day started out gentle enough although in retrospect even I could tell he was pretty tired from the moment we got up. We went to the Jackson Frazier Wetland for an easy walk. This is a very pretty area and accessible for all. 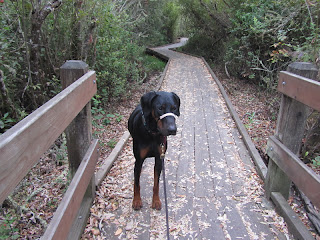 After the wetland walk we hunted down a laundry mat and then went to a Petco for some more treats. By the way, I am just going to admit now that one of my books on this trip book one of the 50 Shades series. Don't read this book in public if you embarrass easy like me. I think that everyone but me knew exactly how torrid these books are. You will get looks.

Then we returned to the Super 8, ate, and headed for a walk around downtown Corvallis.

Corvallis has a strange street life. You have some of the harsher stuff that I would equate to our Pioneer Square but then you have the college life. The area we were in was more Pioneer Square style (think impairment and a more older/harsher street crowd). No one was inherently threatening, but I was aware of my surroundings especially since all three dobermans I have owned have consistently been wary around impairment.

While I was picking our way through the crowd suddenly Nim ran up my back legs and hopped in front of me. I turned behind me and I could see a gal reaching desperately for him. She had run up fast and loud on us previously, apologized, and I didn't think much of her after that. I totally missed that Nim was having a hard time with her. She was significantly taller than me and her hoodie was tied down around her face. She sincerely was trying to be friendly but he wanted nothing to do with her. I haven't actually seen a fear reaction out of him like that since he was probably around 10 months old.

After that I swung into the more suburbs, got on campus, and started working him around people in an environment with more outs. It took him literally blocks and probably at least 2 hours to stop checking behind him or startling around people. It was pretty interesting to watch him work through.

We did eventually make it to the Irish Bend Bridge: 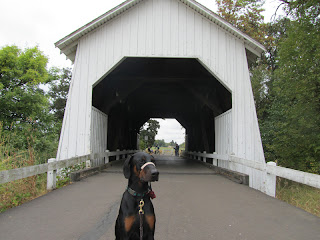 It is apparently no longer historical because it was moved from its original location but neat construction all the same.

We still had to walk all the way back to the Super 8 but I knew which route to go to keep the crowds a little lighter. And he slept much better than me in preparation for our Rally-Free workshop!
Posted by thequiltingdoberman at 4:00 PM