Despite the longer days, there are literally not enough hours for everything I want to do plus everything I have to do (mostly homework).

Because I don't have enough training going on with Nim, I have decided to clicker train Emile. One night when he came when called (after me tearing up the house looking for him) it dawned on me he might be trainable. 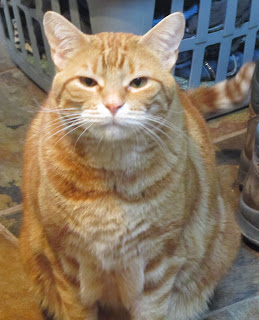 I don't actually know what I am doing with Emile, but according to what I could find online we seem to be on track. Basically right now I am getting him to look when his name is called, I click, then throw the cheese.

I remember my vet telling me I should throw Emile's food around to make him work for it and subsequently lose weight. Somehow I suspect the string cheese reward system is negating any caloric burn Emile gains running for it.

Leela feels the same way about the clicker that she feels about the scale. I think Leela came into this world set in her ways.

Anyway, the biggest problem right now is that the clicker is also a huge cue for Nim. So basically he is in a sustained down-stay while I work with Emile. Considering all the cheese I am throwing around I consider this pretty good training for Nim. 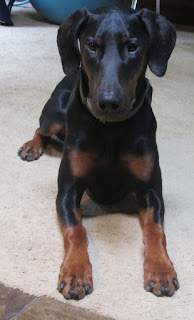 We were in the yard this afternoon for yard work, although I will confess I was actually just sitting out there and reading book five of the Stephanie Plum series (anyone else think that book 4 and so far book 5 were considerably better than the first 3?) when I noticed Nim pretty intent on one area of the yard.

I was able to locate the baby bunny that held Nim's complete attention so that was the end of his yard time for the day. I suspect Nim roughed up this little guy up a bit considering the damp fur on the back (I have seen the same hairdo on Leela). 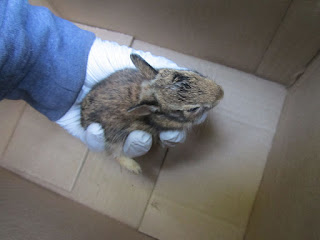 Anyway, I couldn't find any visible injury, but hard to say how the baby will do. Ironically the bunnies are kind of a pain in my rear, and probably about to get more so with my planned vegetable garden but I still don't want my dogs killing them. 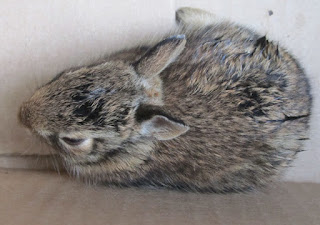 I had a little nest set up for him in one of the corners of the yard I notice is more the bunny area and after I checked on him later he was gone. Although he is so darn tiny he could have been close by and just sitting there. I hope he makes it and he has cleared the fenced area by tomorrow.
Posted by thequiltingdoberman at 7:35 PM