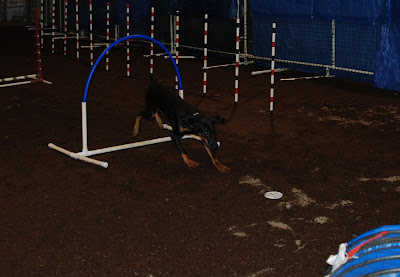 My sister came out again to photograph agility and then swim therapy afterwards. She took so many photos that I am dividing the posts.

I take agility and my obedience class (two different classes) with Seattle Agility Center. So far all the instructors I have worked with have been really great. They are very positive and really skilled instructors.

For puppy agility I have Carrie. She really is good at seeing the lines the handlers run and how we throw the dog off. Also, as Nim while not the oldest is significantly bigger than all other puppies, she is actually really good about understanding his stride and what he needs to make it happen.

Nim is getting better with the table - in that he acknowledges it is an obstacle. He doesn't want to put his rear down. 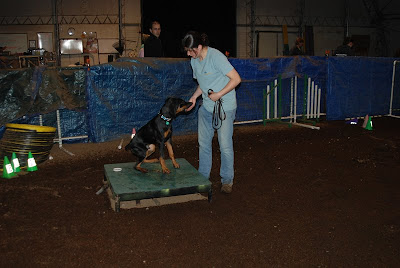 When he does agility on Thursday night there is another class going on next to him in a very large barn. I think it is actually good for the dogs because it is a fraction of the noise and distraction that happens at a real agility trial. I could tell in the first couple of weeks he was really intimidated by the dog traffic, but he is far more comfortable now. 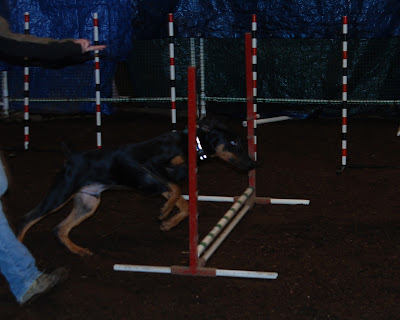 The hoops are a new feature since I last practiced agility. Apparently there are now courses with them in competition. 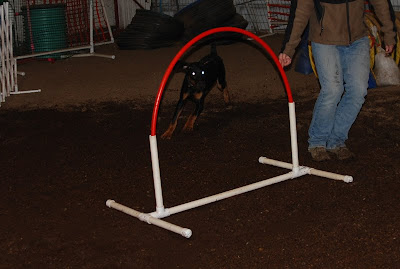 He is starting to get a lot more "verbal" in that he is hearing what I say and correcting his misses. I said "jump" too late and he actually pulled up to take the jump he was planning to run by. 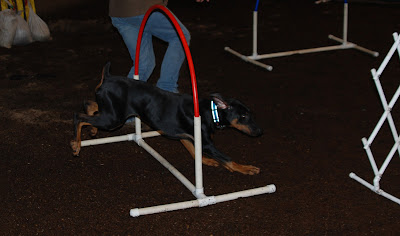 We actually had a better session in general this week. Either it was because I walked him prior or he was having a good day. Who knows.

In obedience on Sunday he was a monster. My trainer for Obedience is Monique and she is really good with animal behavior and very patient. Ever positive, my trainer looked at him laying on his back and kicking this past Sunday and said that "sometimes he is just taken with fits of happiness." :) At least it made me feel better. 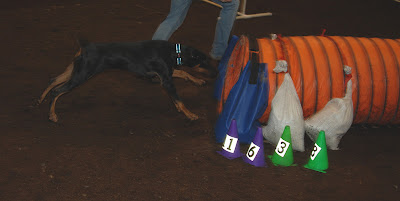 Posted by thequiltingdoberman at 5:33 PM