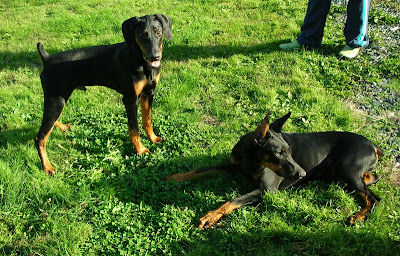 I was in the Fort Lewis area on the weekend and got a chance to take Nim back to his birth home to see his brother and some of the family. 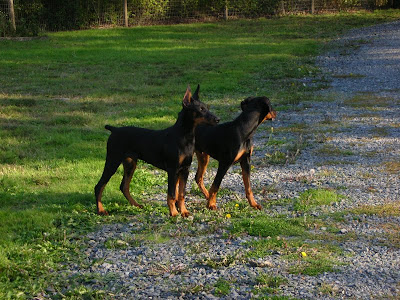 His handsome brother is called Mason. They were pretty funny together. Mason lives with 5 other female dobermans (including Nim's mom and Grandmother) so he lives a far more dog social life than Nim. 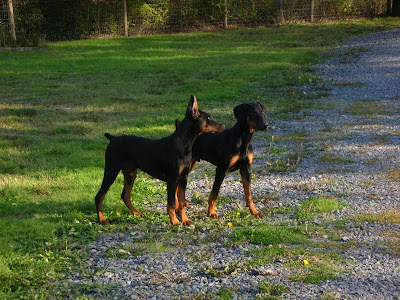 Nim was properly overwhelmed initially, but he really did have a good time. 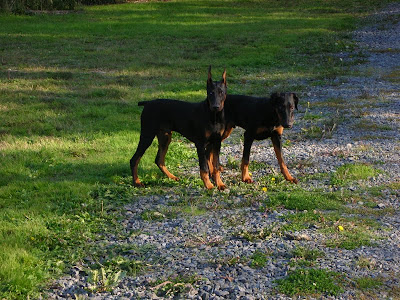 This is probably one of the last times they will really play together. They turned 5 months this week and will only continue to mature more (and build some adolescent attitude). 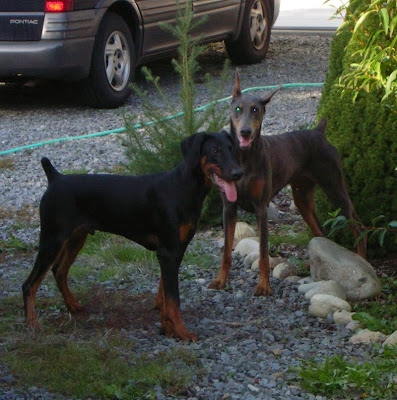 This pretty girl is Neela. She is 11 months old. Her coloring is blue as far as dobermans go. Neela means "blue" in Indian. She wasn't around the puppies when they were young, but now she is Mason's top partner. When they really got playing, Nim would just stand back and study. 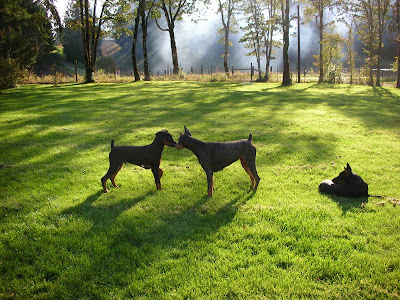 She was very social with Nim right away. It was really nice to see them all together. I could tell Nim had a sense of familiar in this home and I know after this he won't forget it. The breeder even prepared him a special meal when she knew he was coming.

It was funny finding out how much of his behavior is his Grandmother Tyra - including things I wouldn't expect to be genetic - like his need to carry a toy. She also has his fabulous and vocal temper.

After we left he dramatically collapsed in the backseat and immediate fell asleep.

Today she should be in the midst of her hike up Mount Kilimanjaro. Currently it is about 9pm, on Monday, October 18th for her.

She had a great safari and the safari guide shared photos of his cat so they got along fabulously. Sometimes the animals would be dots far away and sometimes they would surround the car - which happened with both elephant and giraffe.

And for those concerned: Merlin is of course fine. He has a live-in caregiver and presumably all the attention he demands.
Posted by thequiltingdoberman at 10:36 AM