Today I took an outing up to Country Village. The last time I was at this location was years ago for the quilt shop and I never really investigated further.

I also knew it was a farmer's market up on Fridays so I was hoping for some good deals. Unfortunately this farmer's market isn't much better than the one in North Bend. I actually miss when they weren't so formalized - there was more variety and better prices at the smaller ones. 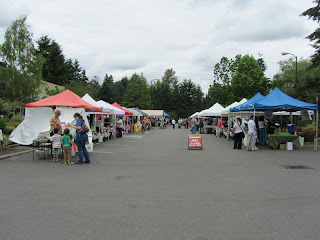 Nim got a lot of good training work. A group of us are talking about doing a show circuit next year in Montana which would be basically a week of Rally Obedience opportunities. He is doing well, but we have a lot of work to do.

This location was extremely heavy on kids which makes for a very unpredictable environment. This was also day of tiny dogs on flexi-leashes. Needless to say, he attracted a lot of attention. 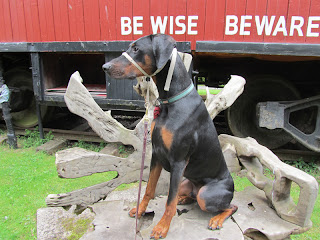 I loved this bench although I doubt Nim cared. His mind was on the ducks who are used to coming up to people for feeding I think. 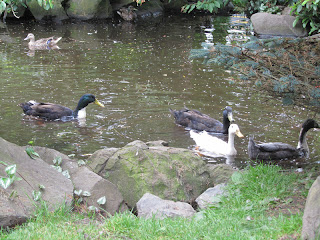 He might have been intimidated by the roosters, it was hard to tell. 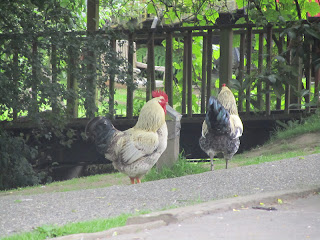 I love this one high stepping it. 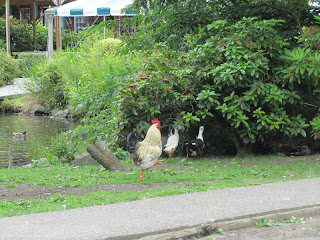 I didn't go into any of the shops, it was too muggy to leave Nim in the car. 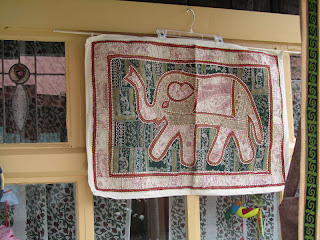 But I did do a lot of window shopping. 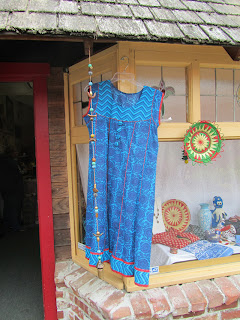 This train is constantly zipping around the shopping village. It puts people right about at face level with Nim so he got lots of people talking to him as they would go by. 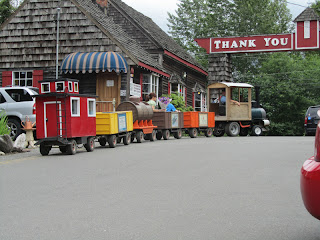 Eventually the Gentle Leader came off (poor nose, I can't wait to be entirely off that thing) and we did some great work. We stayed out of the main farmers market and just worked everything else.

He finally completely "broke" when two boys (old enough to know better) chased a large rooster out in front of him. I don't think he knew whether to chase it or run away, and the rooster wasn't doing much better considering he had a large dog in front of him and two obnoxious boys behind him.


After that it was time to go home with Nim melodramatically collapsed in the back. :) 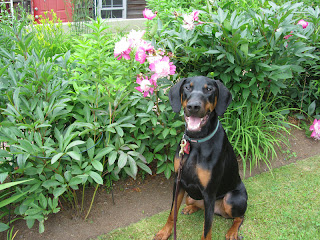 Quick baking run down! I got excited to try three new recipes for the bake sale (in addition to a ton of dog treats and some baby loaves). 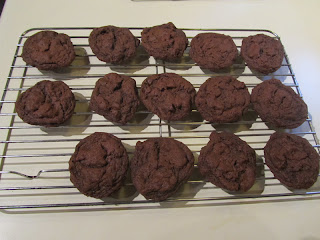 These were wonderful! I wish I had tried them sooner. I even think they would be a better chocolate chip cookie (definitely healthier than my current veganizing of the tollhouse recipe) if I was in the mood to leave out the mint. 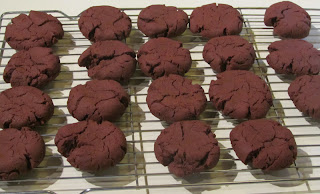 This is another really good find. I happen to like chocolate crinkles and these are way better. Absolutely will be making them again. I didn't use almond extract, I just doubled the vanilla. 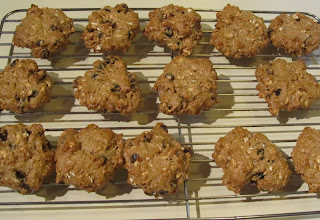 This is my new favorite oatmeal cookie and I have really been hunting for one. I got nervous because the batter almost broke my processor (it almost turns into play dough) but they are absolutely outstanding.

I am really excited about all three recipes. They are vegan and a little more fancy but without being too weird for the general public. I also think all three will ship well and I have another round of BakingGALS coming.

Have a great weekend!


Posted by thequiltingdoberman at 8:57 PM