Even if you grew up in WA like me and you know that it is almost always raining for the 4th of July it still doesn't stop the weather complaining does it?

This has been a LONG week. Even last week I did enough either absent-minded or flaky things that I got concerned.

At least Wednesday and Thursday of this week we had some sun. 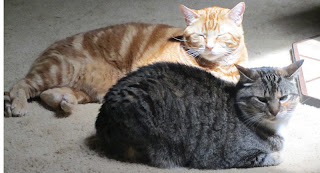 Flat Kitty Friday theme with STUFT Mama was supposed to be summer. So I attempted to get Flat Kitty into the sun spot because that is about as summer as it gets around here for now.

Initially Emile checked him out, but this caused him to step into Leela's space and so then they started fighting, Nim came running through, and Emile ended up under the bed again. 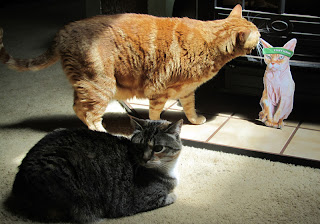 Thanks to STUFT Mama I now know who Bob Harper is. I couldn't stand it anymore and looked him up after several of her posts referencing him.

I realize I may be the only one that didn't know who he was. In my defense I don't pay for cable and although very active, I am not exactly a "fitness enthusiast." Although I tell you what body: if you don't tell me exactly what aging path you are on and what you need I am about to become one. 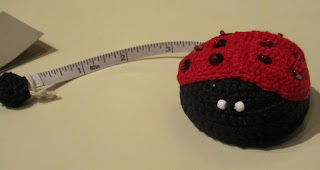 My mom has replaced this Lantern Moon measuring tape. The one I got for Easter may or may not be in the garbage or somewhere else in the house thanks to Leela's relentless hunting of it (naturally she is so afraid of this one I can't get a photo). When I got it for Easter I remember shaking it and thinking it was broken and it went on an upper shelf and then repeatedly having to get it away from Leela.

It needs a "pull me" sticker. 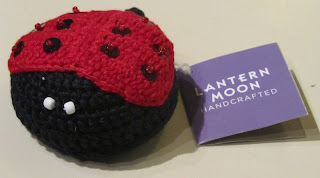 This quilt is finally quilted and just needs to be bound. I may even sew more this week between the summer rain and being a little winged thanks to a "hiking injury" which I attribute to being tired and clumsy.

The only person I know that falls as much as me is my Grammy. And considering how much younger I am it is a bit concerning. 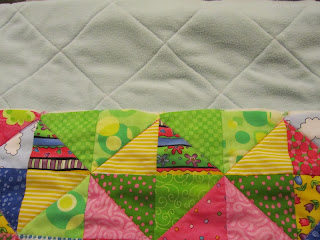 I am actually looking forward to writing a review on Drop Dead Healthy which I finished today. At first it was hard to get into because I decided to start a Stephanie Plum novel at the first time (which I thought I had already read).

By the second half of the book I got a lot more into Drop Dead Healthy. The second half, whether intentionally or not, starts to deal more with the "balance" aspect of healthy living. It was a natural transition as he was wrapping up his experiment and considering his healthy living priorities as well as the death of a couple of family members that were both featured considerably in the book.

I hope everyone is gearing up for a fabulous weekend!

Posted by thequiltingdoberman at 5:08 PM