Rusty is standing on my new weapon against the encroaching mud. I had a towel system going before, but the darn cats (we all know it was Leela) liked the towel so much that it would mysteriously be twisted up in some ball whenever I needed it. 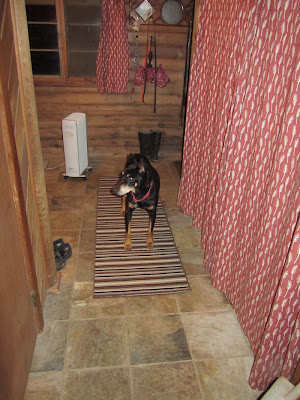 I think January tried to make me dislike it less by not raining today - of course, as I have started typing this, the rain has started.

I am ready to give February a chance.

Even better yet, February 2, around 7:25am, EST, Punxsutawney Phil the Groundhog will hopefully decide that winter will not drag on and on. 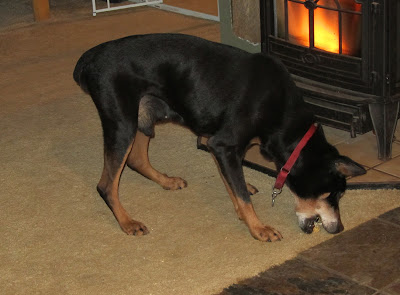 Rusty is having a tough tough time and in about two weeks I have cycled a ton of emotions trying to adjust and keep up.

I busted out his favorite chew today and while he would start on it he eventually walked away and left it which is unheard of for him. You can see in the above photo that he is in a semi-crouch. He would normally lay with this chew. I watched him try and try and then give up. I was so busy dealing with the weather and the water that I wasn't really giving him adequate support. Senior dogs unfortunately rarely do well in weather extremes which ironically is usually when their humans are at their worst as well.

I watched the movie "Buck" this weekend. Even if you are not a horse person, much of the training principles show up in dog training with a knowledgeable trainer. One of Buck Brannaman's thoughts is to "operate on a feel." In his case this was in the context of horse handling, but absolutely applicable to dog handling as far as I am concerned. It made me start to think about how much or how little I can "feel" Rusty especially right now while he is doing so poorly. It definitely has been changing my focus with him.
Posted by thequiltingdoberman at 6:52 PM