Both Nim and I are a little haggard from a very loud and long 4th. Keep in mind we were actually just boring in the house. All around us was a valley of explosion. I did a lot of late night house cleaning. 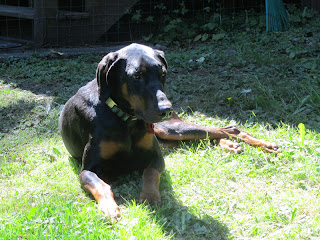 Shockingly we got through obedience today actually working together. The way the morning started I didn't see that happening.

The best part of the 4th was probably that I tried STUFT Mama's Zucchini Muffins!

They really were good - despite my laziness in getting chocolate chips which right now I swear I NEED. But I love all things zucchini and this recipe will be done again (possibly tonight).

Modifications (mostly to make vegan and/or too lazy to go to store):

3. Also didn't have any vegan yogurt so made the Vegan Greek Yogurt recipe which honestly is super easy and I find preferable to buying soy yogurt. When I make it to add to a recipe like this:1/2 package of the tofu, 2 tsp vanilla, 1/3 cup almond milk and call it good. No need to sweeten. It makes roughly 1 cup.

4. Used pumpkin instead of the applesauce...amazing decision. Having made enough zucchini bread with applesauce I think I preferred the pumpkin, however I am also on a pumpkin kick right now.

5. Omitted the agave entirely and just added roughly that amount of water (basically until it was a manageable dough for the muffin tin). This is again knowing my taste preference with zucchini bread. I could have omitted some of the white sugar instead and added the agave but I didn't read ahead in the recipe to notice the agave was coming.

This was an easy, successful recipe and enjoyed by non-vegans as well. 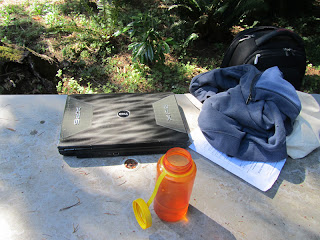 I am borrowing my mom's laptop-of-unusual-size to try and decide if I want to get a cheap one off Amazon.

I am a total desktop user. But as I have gone from less and less Web site development (the program and files are hogs) and more administrative and school work I am considering a laptop now.

I am also going stir crazy being strapped to my office for work and school. Which is odd to me given I have worked from home for over 10 years. School has kind of tipped the balance. I need to be able to work on homework away from the desk.

Outside in the yard was not particularly successful. At least I tried. 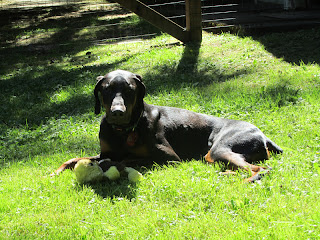 Then I got restless and moved on to yard work. Nim sunbathed and supervised. 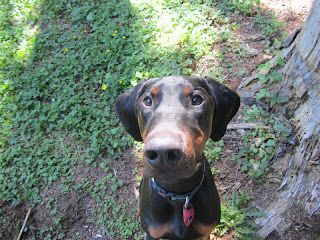 Posted by thequiltingdoberman at 5:34 PM