If this day trip taught me anything it is that while Nim has considerably matured he is still a really young and inexperienced dog.

We probably could have stopped with the ferry experience in terms of his over-stimulation but my "planned" destination was The Putney Woods. 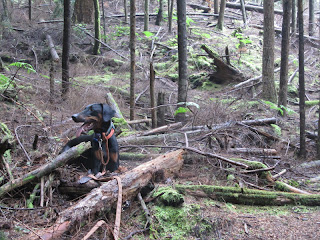 I am not sure which of us nearly had the meltdown first: Nim in his excitement of all things new or me having to listen to him talk about it.

We ended up accessing this system at the Saratoga parking lot (which was completely empty by the way). I actually had wanted to do this southern access (Goldsmith TH) but was dealing with unpredictable weather and opted for a more contained and potentially more scenic option. 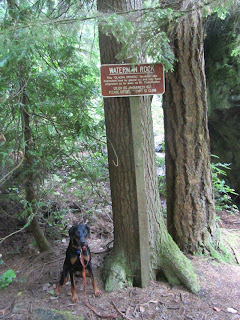 My goal was to track down Waterman Rock. It is a good thing I had two maps for this. One was just the basic trails and one was more of a topo map. I think there was once a sign labeling the trail for "Waterman Rock" but it wasn't there yesterday. There is a lot of unmarked trails I think coming in from residences. 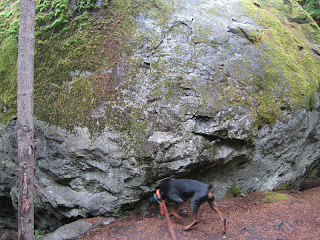 I couldn't figure out what Nim was all in animated about under the rock and then I realized he had located a geocache. All three geocaches that I have ever seen have been located by the dogs I was hiking with. Geocaches I think have good human odor and whatever else is in them. 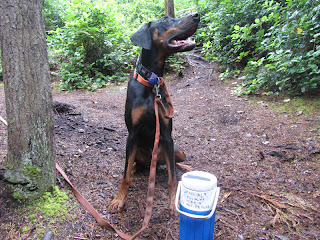 By the way, he is looking up because the clap of thunder which increased during our entire hike. 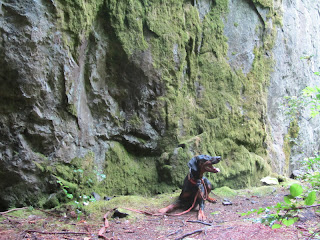 Although I didn't get to see even half of The Putney Woods I would take inexperienced hikers in there. There is minimal elevation gain, the trails are in decent condition, and it is a beautiful system. 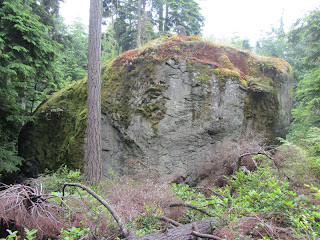 Waterman Rock was a fun location. I am a huge sucker for anything glacier related. 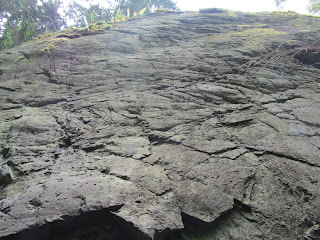 We left Waterman Rock and headed back out on what was once a landing strip:

"In 1958, a grass airstrip approximately 100 feet in width and 2,400 feet in length was constructed on the property for private non‐commercial use. Mr. Wood allowed friends and family to use the airstrip. The airstrip was closed for use by his friends in 1985 due to liability concerns. For more information on the history of the site see the Environmental Site Assessment Saratoga Woods Parcels (2001) report, on file with Island County." - from Saratoga Management Plan (large PDF, you may not want to open). 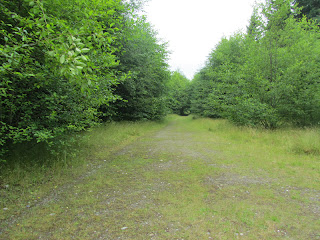 Honestly Nim was most at ease as we walked the landing strip. The woods were beautiful but dark because of the storm and the thick woods seemed to amplify the different wildlife noises. 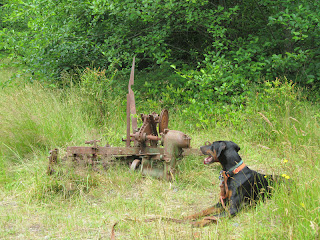 Fortunately for all of us Nim relaxed enough to poop. This put him in a better mood and then he wanted to play with his toy. 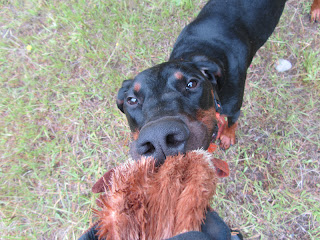 He then defied his normal patterns and carried his toy almost all the way back to the car. Normally will carry it a small amount and then leave it somewhere. The toy also blissfully stopped all the vocalizing. 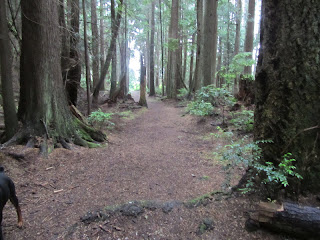 I ended up cutting this hike much shorter than planned. I was going to get out of the Saratoga section and starting going further into Putney but once I committed to that I knew I was going to get very far out pretty fast and the weather was just too rough this time.

I think this decision was harder on me than Nim. I wanted to put down the miles, he was already completely overloaded. For how much persistent and close thunder we were dealing with I do have to hand it to him for holding it together pretty well.

So we loaded up and headed into Langley for some waterfront time...
Posted by thequiltingdoberman at 11:39 AM