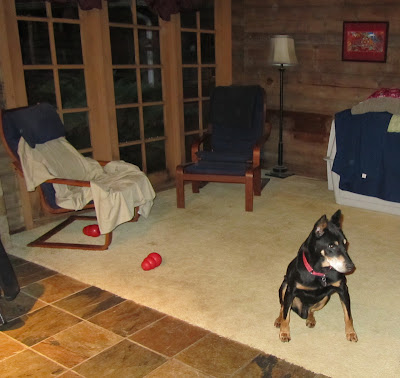 I am hoping today will have a couple of update posts, including at least one just before midnight with the start of my Mystery Quilt! I had intended to try and sleep a little more last night so I wouldn't be so tired today, but since I couldn't sleep, I got up and started my cooking and baking for the day.

You can see from the Rusty photo that the sun is starting to really come out - this is about an hour into my baking. Dark mornings can be a mix of peaceful or lonely. This morning it felt like no one (except Rusty of course), not even the wildlife, was awake with me. 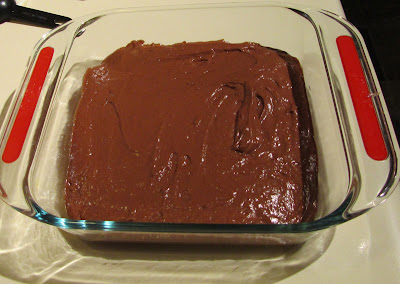 My first project was a chocolate vegan birthday cake! Today is a sister's birthday and fortunately while not vegan she doesn't mind my vegan baking. :) The recipe is from "The Joy of Vegan Baking" by Colleen Patrick-Goudreau. I have a lot of success with this book. This book also holds probably one of my most dangerous desserts as well. We all have things that when they are around we know we aren't going to be very restrained. Well her Peanut Butter Chocolate Bars are one of those things for me. I even half the recipe for my own safety.

Stay tuned for a frosted photo of the cake later.

While making the cake Rusty ran around the house and drove me nuts. Definitely not peaceful. 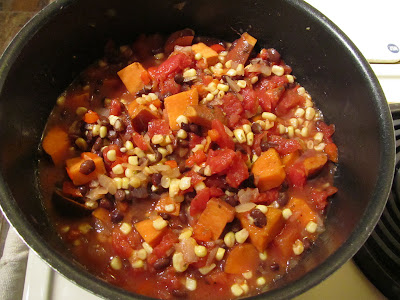 Then I put together my second black bean recipe. This Autumn Stew recipe comes from "Vegan Soups and Hearty Stews for All Seasons" by Nava Atlas. It is the first recipe I have tried from this book. I haven't tasted it yet, but the instructions were straight forward and it looks good. The major substitution I made is sweet potato for squash. This is because I buy sweet potato by the box from Costco and I didn't want to go buy squash. I probably should have used frozen bell pepper too because fresh is super expensive right now. I did use frozen corn.

This stew should be nice to have around while I am working on my Mystery Quilt. It is pretty fun how many of the people on the discussion boards are planning their snacks for the day. One even had a husband ready to provide snacks and tea on the hour! :)

Meanwhile, no working toilet in my main house still. I do however have some deep holes exposing the pipes and a backhoe in my yard while progress on the problem continues.
Posted by thequiltingdoberman at 7:52 AM