Seeing as last night was a Friday night and baking right now is apparently my favorite outlet, I decided to specifically try different recipes I am attracted to but for whatever reason haven't made time for.

The Daily Garnish is big on banana bread and does this great job of making all her recipes look amazing. Amazing enough that every time she posts one I actually consider it before moving on.

As far back as I can remember, I hate banana bread. In fact, I don't even like the smell of it baking. I also haven't tried it in over 15 years because I am so adamant that I hate it. 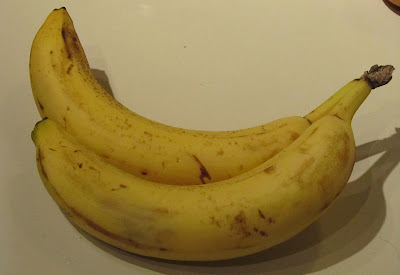 Meanwhile, on the Chocolate-Covered Katie site, there was a recipe discussion (can't remember on which recipe but I am definitely not the only one with banana bread issues) in which it was mentioned that if you don't like banana-based baking, try not using the gross black ripe bananas. So armed with this new baking information I decided to try a banana bread recipe using bananas that I would still eat.

The recipe is The Daily Garnish Blueberry Walnut Banana Bread. I cut the recipe in half (less waste when I threw it out), used the above bananas, and used my frozen berry mix. And guess what...I loved it.

Interestingly the baked result was less strong banana flavor than the raw dough (a good thing for me). 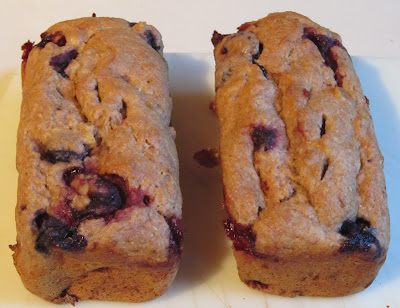 I think I need to bring the oven temp down a bit because I used mini loaves but other than that, I feel ready to try other banana-base recipes with the success of these. For me, bananas in an edible stage definitely made a difference.

I didn't take a photo of my other Friday night experiments (I was feeling totally off yesterday) but the other big stunner was a quinoa concoction involving lemon juice (I read about that one on a different site). It came out amazing. Veggies in that mix included zucchini and kale.

And then I made this Miso Tahini Sauce which completely blew me away. I have been trying to make Tahini sauces for years. This is the closest ever to a sauce from the now long gone restaurant known as The Gravity Bar in Seattle (this used to be one of my top reasons to even commute to Seattle). I put it on top of my quinoa mix.
Posted by thequiltingdoberman at 8:03 AM