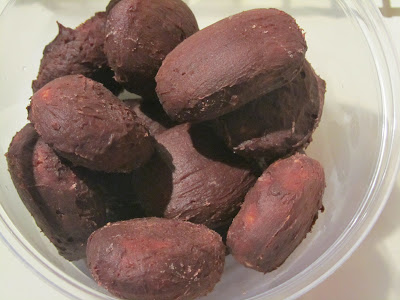 Time for April. I have a pile of work-work and my new quarter has started but it is a new month.

First, some final March projects. March 31st was baking extravaganza as I was meeting with friends Sunday morning.

I doubled the Copycat Recipe: Reese's Peanut Butter Eggs recipe and did a much more careful coating job. What helped me was Nitrile gloves (a kitchen staple as far as I am concerned). These were successful with the gluten-free eater in the group and anyone who would try them. 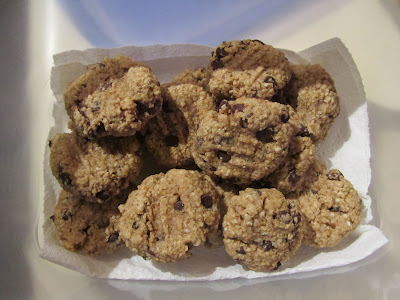 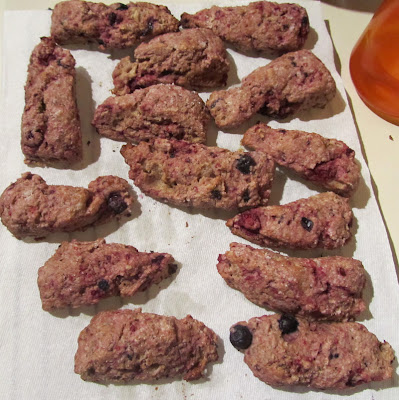 The Daily Garnish scone recipe makes yet another appearance and mine are back to ugly because of a failed attempt at "mini-scone." However they still tasted fine and were appreciated by one on an "omitting sugar" diet. NEXT time I go the "mini-scone" route I will divide the dough into two mini-rounds and cut each up into 8. Rather than one giant round which I attempted to divide into 16. I learn something new every time. When I follow her recipe I omit all the spices and the currants. I use a cup of chopped frozen berries instead. 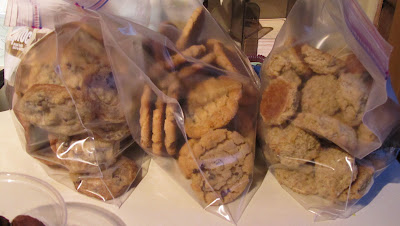 And finally my standbys that no one can tell are vegan. They are full sugar, white flour and closest to conventional recipes. Makes everyone happy. The oatmeal cookie is from the Quaker Oats lid, the chocolate chip is basically the Toll House recipe, and the peanut butter-chocolate chip is Betty Crocker (I think). All are made with Earth Balance margarine, egg replacer, and Enjoy Life Chocolate chips.

Just looking at this avalanche of baking is relaxing. :)
Posted by thequiltingdoberman at 8:36 AM