Apparently nothing on my check list is getting done today. Specifically my homework. I am getting some things done...just not what I considered a priority for today. 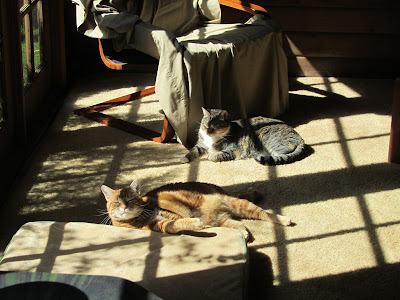 Naturally this included some time in the kitchen. The second I started getting supplies out it stopped raining and the sun came out. The cats fought over the sun spot and finally reached a suitable arrangement. 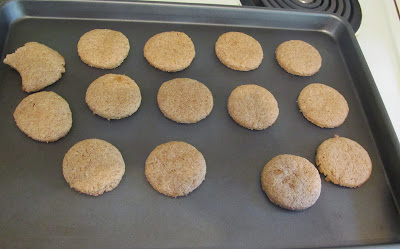 This is Chocolate-Covered Katie's Graham Cracker recipe. I was contemplating the Whoopie Pie but I have a weird thing about them. I have never tried them before and every time I see one at a bake sale I don't like how they look. I should probably make them just to see how I like my version.

Anyway, Graham Crackers are a bit on my mind due to my cheesecake attempts. I wonder if I could just take the dough from these crackers and line the pie pan with it?

I liked the "crackers" and they ended up making me think of strawberry shortcake instead so I decided to make another round of the vanilla ice cream for a later and greater plan involving berries. I put a full teaspoon of vanilla in this time and it still doesn't seem too strong. We will see when it is frozen. 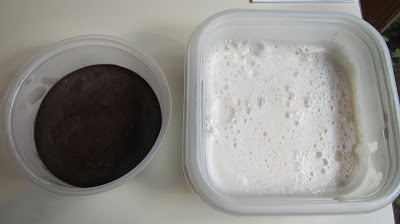 Next to the ice cream is three-ingredient chocolate recipe from the Homemade Chocolate Bunnies post. Actually, it is more the chocolate coating from the Copy-cat Reese's Peanut Butter Eggs recipe because I didn't read the post carefully and assumed they were the same.

They roughly are. I added peanut butter this time around because I want to see what happens and I have plans for this creation also for later.

The chocolate and the ice cream were initially photographed in the freezer. But then I saw how dirty the freezer was, so guess what I am about to clean now rather than do homework. 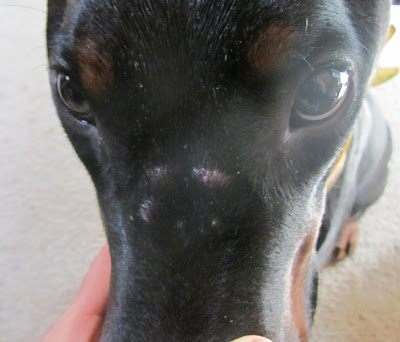 After over a year of Gentle Leader use for some reason Nim is suddenly having a reaction. Fortunately I am in the process of working him off of it, but I am still bummed because it can really help me out in some situations. I think this was actually after using it in the rain last week so I will probably start by switching out the moleskin I have on it.

Right now I am treating the area with Emu oil which he actually enjoys. I that that works up into a calming spot for a dog to have oils rubbed in (although in this photo it would appear he is considering his options once I release his snout).
Posted by thequiltingdoberman at 3:18 PM